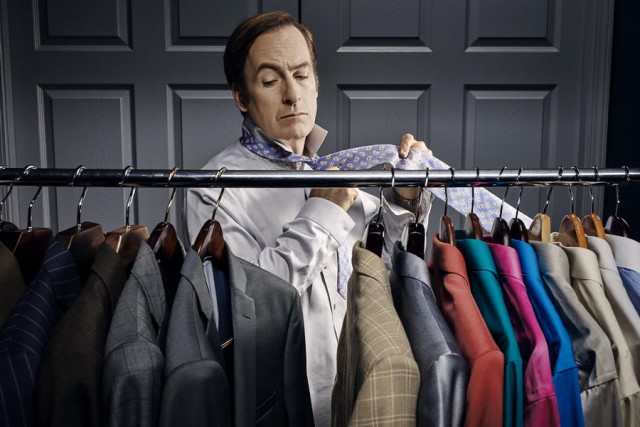 In 2015, the president of FX, Jon Landgraf, opined that there is just too much television.

There’s a lot of truth to that. There are more television shows than stars in the universe (well, not really), and many of them are very, very good. It’s hard to keep up with the scrum; wonderful things like UnREALÂ andÂ Crazy Ex-Girlfriend slip through the cracks, to be watched much, much later. It’s not the fault of the television industry or the shows themselves. It’s just hard to find time for 400 separate series in your day.

One thing that we are missing, however, is Great Television.Â Breaking Bad,Â Mad Men; all of the shows like this have long since gone off the air, and left us to fill the vacuum with the A- and the B+. That’s not a shot at those shows, but rather an observation of the world around us. To put it another way: not a lot of franchise players, but a hell of a lot of stars.

Better Call SaulÂ has returned tonight to change all of that.

We open in black and white, in the Cinnabon.

Saul is no longer Saul, and no longer Jimmy; he’s just some slapdash manager, teaching and guiding high schoolers, trying to keep his head down. There is no future here, not for him, anyways. Those teenage girls will graduate from high school and go to college and hopefully settle into a middle class existence. They’ll never reach the highs that Jimmy hit, and they’ll never flee their home like Saul has.

He does his job dutifully, it seems. He works to the last minute, and then takes out the garbage. It’s in a plain, concrete room, and the door won’t stay open long enough for Jimmy to escape. He bangs on the door, calling out for the headphone’d floor waxer. He could push out of the back door, but it’s rigged; if he cracks it open a millimeter, the cops will be called.

Jimmy is trapped in a garbage room; it smells like antiseptic hand wash and cold, rotting meat. He has to sit there, on a crate against the middle of the forward wall, and take it. His way in has been blocked off, because he wasn’t careful enough. Jimmy has to sit there, and take it. He has to accept the abject horror of his situation; the smells, and the disrespect, and the lack of dignity. He has nowhere to go, because he wasn’t careful enough to keep the door open. He wasn’t quick enough to get back through when it began to slide closed. Jimmy is trapped in a room foul-smelling sewage, and he just has to take it.

He escapes, eventually, but he’s spent hours in there. He probably has to go back to work at this point. He has to go back to the Cinnabon, in wrinkled, soiled clothes, having had no sleep, and work a job so menial that the police would never think to look for him there. But before he leaves, he carves into the wall: “SG was here”. He escapes, but leaves his mark on the place.

I wonder what the next black and white will bring?

There is a concrete satisfaction to watching TV that you know is in good hands.

The cold open, in my opinion, is one of the most revealing and emotional scenes I’ve seen in television in a long time. It’s almost a catch-up for new audience members, as exposition through metaphor, but sets up a clear narrative purpose for the show going forward. It opened with black and white just as the first season did; I suspect that we’ll be seeing the story of the Cinnabon manager play out over the premieres of each season.

I want to see more of this story; this Cinnabon manager. I want to see more of the world that he inhabits. I want to see if Jimmy reappears in the empty spaces, or if Saul has permanently infected Jimmy’s soul. You have to think that Jimmy wants to run. You know he wants something better. But as that cold open showed, the only way out of the hellish dumpster that he found himself it through the cops, and the truth, and that is no place to go at all.

Mike has seen this movie before, with Daniel the drug dealer. He’s been a cop, and now he’s a criminal, and he’s been both and neither. He sees that Hummer, and those stupid shoes, and he knows that Daniel has already lost the thread. The thing about being a criminal is that you’re always looking over your shoulder. The nice rules and regulations meant to protect you when you live in polite society and thrown out the window when dealing with meth dealers.

Daniel doesn’t care about the money, but he does care about the power. He can tell Mike to stuff it, and hop in the leased hummer with the spinning rims, and jet away. He can do this deal by himself, he thinks. What do I, the great and powerful and recently, suspiciously, dumfoundingly wealthy Daniel, need of someone to watch my back?

He’s so stupid, he calls the cops to his house. He never thinks for a second that someone may have robbed him for the drugs he kept in a cutout in his wall, or that calling cops to his home where, it must be mentioned again, he has drugs hidden in a cutout in his wall, is a bad idea. He’s not even a chemist, for Christ’s sake; he works in IT, and has no real sense of the things he smuggles out.

But those flaws could be overlooked; after all, Walter White was just a chemistry teacher. But the thing that always kept Walt ahead of the game was his brains, and Daniel is a moron. Walt could engineer a car battery from some miscellaneous items and build a bomb with some chemicals and a plastic baggie. Daniel can’t find a pair of shoes that don’t squeak.

So, Mike is out of a job. He’s out of a job, and in danger, because that IT idiot is now on the police radar. I can imagine that, standing in front of this balding, squeaky-shoed doofus, Mike considered shooting him in the face.

Jimmy and Kim bond again, over a con, and they sleep together for the first time inÂ Better Call Saul. It should be a momentous, orchestral moment; where are the flues and strings and blaring trumpets when their lips meet? But it’s played as just normal. It’s played as reality. Kim won’t let Jimmy use her tooth brush so he puts toothpaste on her finger and brushes his teeth. They both crack up, amidst foamy toothpaste.

They are perfect for one another.

She finds him a job that he initially turns down. He wants to Break Bad, and spends a few days lounging in the pool. They run that con together, busting down the douchenozzle investment banker, and she changes his mind. He decides to take the corner office, with the infinite customizability, and the promise of a better future.

But we know how it all works out. We saw not forty-five minutes ago that Jimmy is gone, and Saul has fled, and this new mustachioed slouch of a man has taken their place. Jimmy has already long since disappeared, and failed, as has Saul. To watch Jimmy have it all in his fingers, grasping not at the tethers ofÂ a life long past but at the reins of one stitched to his plans, and to know that it ends in the cold, useless, attempted sterility of a garbage room, is heart-breaking.

My only hope, from this minute forward, is that when the bomb goes off, it doesn’t level Kim, or Howard. My only hope isÂ that when Jimmy becomes Saul, he leaves something behind, other than a smoking hole in the ground.Â But he won’t. He can’t.

That’s not the story that’s to come.

Jimmy turns down a job, Kim and Jimmy bond, and Mike loses a job in the second season premiere of Better Call Saul.