Ah road trips. Many hours in a car with people you can barely stand in real life can really take a toll on the relationships with those people. This no truer than in this weeks episode of TBBT. With Sheldon calling all the shots for the trip, you know the trip was going to be a doozy.

This weeks episode tried something very new to the series as most of the episode was filmed outside of the apaartments of Penny and Sheldon/Leonard. In fact, the only scene filmed there was the quick orientation meeting lead by Sheldon. This scene itself proved to be funny as Sheldon only alotted 6 0z of liquid per person and Amy insisted to ride with her “bestie” Penny. From here, the episode really took off. The car ride scenes were quite funny but compared to the other aspects of the episode, they fell alittle flat. I chuckled through most of the car ride but only truly laughed when Howard and Bernadette started singing “I Go You Babe”. I have to say, Howards impression of Sonny Bono was pretty good.

The greatest moments of the episode came directly from the hotel and the actual science panel discussion. After bumping into an old flame of Bernadette’s (played by Rick Fox), Howard begins to doubt himself as being good enough for her. Of course, Howard makes the classic man mistake by speaking way longer 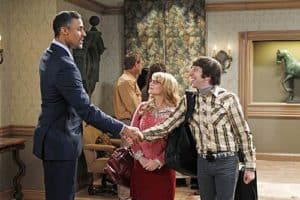 than he should and ends up upsetting Bernadette. This one instance starts a long spiral of roomswaps. From Penny leaving her room due to Amy’s night terrors, to Sheldon leaving because Penny and Leonard may/may not have sex, to Raj leaving his room because Sheldon won’t let him watch Bridget Jones Diary, and ending with Leonard and Penny having “coitus interuptis” due to Raj staying in their room. Each scene was equally funny on its own, but as a whole, it proved why TBBT is one of the funniest shows on.

The other scene that really had me laughing was the science panel the characters were hosting (minus Penny who was only heard off screen). The back and forth between all of the characters was so thought out that even I had no idea what would come next. The arguement between Bernadette and Howard referenced all about the fight and the size of a man… that’s all I’ll say about that. What happened next just built on the nights previous mishaps as Leonard became upset at Raj for ruining a special night, Penny yelling at Leonard that she is not his girlfriend, and Amy outside the circle and only thinking of her bestie. It’s rare to get a scene where all the characters are angry at each other yet ends up being funny.

This episode was such a step up from last week that you almost forget about it. The writers did a great job with making the whole situation seem realistic and that makes for great comedy. A

Agree with the rating? Disagree? Just want to talk about Bridget Jones? If you answered yes to any of those questions leave a message in the comment section below or in our forums.