After a one week break, Big Bang Theory returned to hopefully show us why we all fell in love with the show in the first place. Well, I can say that the episode at least tried to be a good one but, just like Sheldon’s lecture, the episode itself fell flat.

The episode had very little this week of Leonard and Howard and instead focused mainly on Sheldon with a few Raj moments peppered in for breaks. The Sheldon story had great potential to become a very funny story but I felt the writers didn’t let the scenes develop all the way through during the acting lessons. The jokes made could be seen a mile away and even then they felt rushed. Yet, somehow throughout the tedious acting lessons, we the viewers were given a look into Sheldon’s past. While it was done through Star Trek Fan Fiction, Sheldon, and more importantly Jim Parsons, gave a great performance of how he really felt as a child in Texas. I really felt sad for Sheldon as he began to actually cry over the scene, and when he said to his mother ‘I Love You’, I really felt that Sheldon actually does have human emotions after all. It will be nice to see if the writers expand on Sheldon and his mother anymore.

As for the other story being told this week, I really wish it would have been left out. While I love the character of Raj, making him daydream over his best friend’s girlfriend is an overused concept in television programs. Yes, the writers tried to keep it fresh by making us think Raj wasn’t day 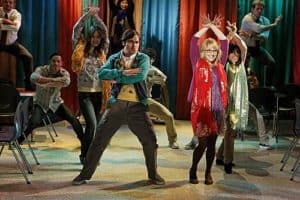 dreaming at first but, fans of the show probably realized it was a day dream real quick. I mean for goodness sake, Raj needs alcohol to speak to women and in his dreams there was none. These scenes were horrible on their own but what really pushed them to unwatchable had to be the Bollywood dance number. I expected this from a certain NBC show (and I don’t mean The Office) but, to see it on a brainy sitcom like Big Bang Theory, it felt very out of place. Hopefully, the writers will go back to making a smart comedy instead of outsourcing their comedy.

This season of Big Bang Theory has had its moments of greatness and then its moments of not so greatness. I have to say that this episode falls directly into the latter category. C