With the past few weeks, I feel that TBBT has slowly slipped into a rut and began to only use marginally funny jokes of science and a great amount of sexual humor. It seems I may have spoken too soon as TBBT has come back around and surprised not only me but I believe a lot of viewers last night. Does it seem TBBT is finally regaining its foothold in comedy?

This week showed a slight deviation from other episodes as it split its time across 3 stories, 2 of which were connected. To start, we the viewers were thrust into the love life of Howard and Bernadette. The two have been a couple for quite some time and every now and then we get a glimpse into their life. This week actually gave us more on their relationship than what we have seen before. With Bernadette feeling awkward with Howard leaving every night after sex, she asks him to c 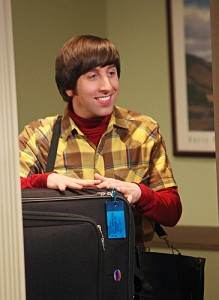 hoose between her and his mother. Oh if Bernadette knew what she was asking of Howard. For most this is a semi difficult decision but, for Howard this is like asking to choose between his girlfriend and air. The relationship between Howard and his Mother is one of the funnier story lines that have gone on since season one. The scenes tonight between the two were no exception. It was a gutsy move for the writers to rely on the same joke between Howard and his Mother (The whole sex criminal routine was done about 4 times) but I believe it really paid off in the end. I laughed every time it happened and sadly I will probably laugh just as hard when I watch it on reruns/DVD.

The two crossing stories were really not as good as I hoped. With Raj’s sister Priya returning, Leonard sees this as a chance to get back together with her. This leads of course to Penny starting to feel insecure about herself and begins to spiral downward emotionally… again. While it is nice to see that Penny is showing signs that she still may have feelings for Leonard, I feel like it is every other week Penny gets emotional about Leonard dating. At least this time around Penny had Amy there to comfort her and this lead to some great moments this week. With Amy being the female equivalent of Sheldon, I expected the consoling from Amy to be somewhat rooted in science and zany formulas that we know Sheldon uses with his friends. However, the writers did a nice job throwing in a little curve and have Amy use Penny as an experiment for her research. Now I know Sheldon from time to time will experiment on his friends but to see Amy use Penny at her lowest point for science really showed me that not only are Amy and Sheldon meant to be together but, Amy and Penny’s relationship as friends is analogous to that of Sheldon and Leonard. One can only hope for a great double date between the four of them.

This episode started to restore my faith in the show but it still seems that TBBT is quite a ways away from being the way it was in its first two seasons. Hopefully by season end we can not only see an emergence of Penny and Leonard together again but an emergence of more episodes like this. A-