Ah the intriguing acts of magic. It has mystified the young and the old for many years. Well, this week on TBBT magic has claimed another victim. But, who would have thought Sheldon would be the one to fall for what actually wasn’t magic. With the whole act being based on a trick, were we the viewers also tricked into a joke? Pick a card from the deck and read on to find out.

Before I get to the magic story, I feel it is more important to talk about the Leonard/Priya/Penny love triangle. Now while Penny isn’t making moves yet, I’m getting a feeling that before the season ends, she will make a move. This week brought out a side of Priya that really is making me believe she will ruin any chances Leonard has with Penny in the future. In fact, for some reason I now begin to think the only way Leonard will be happy is when he is with Penny. Seeing Priya almost force Leonard into dropping Penny as a friend is nothing new. Girlfriends and 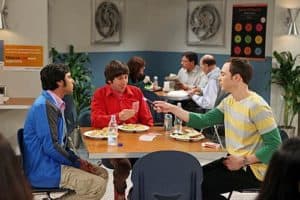 Boyfriends make their significant others do this all the time. Most people comply so as not to upset their partner but, I could see that Leonard did not want to do this. Maybe it’s because they have become great friends or maybe he is starting to realize she needs to be part of his life for him to be happy. He kept his glasses per Penny’s request, which was against what Priya wanted. I am expecting a major throw down between the two women, especially after Priya learned Leonard hasn’t cut all ties with Penny.

Now for the story which provided a great deal of humor this week. When Howard tries out a magic card trick on Raj, Sheldon believes he can figure out the trick through science. I myself tried to figure out this trick but to no avail failed. It was only when it was revealed that Raj and Howard were working together on this trick that the story became even funnier. With no possible explanation in site after that, Sheldon’s actions to figure out the trick became more frantic. It all came to a head when he hacked into a government computer and tried to buy uranium on Craigslist all in the same night. I love seeing Sheldon react to situations in ways that no one ever would, and in turn it creates great humor. I only hope to see more stories like this, even if they are the side story.

With a strong front story, a hilarious side story, and surprisingly little to no masturbation/sexual jokes, TBBT really pulled out a great episode that reminded me of early episodes of the series. This episode showed that there is still life left in TBBT. A