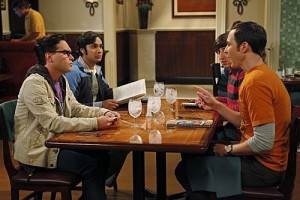 This week’s episode was all about Raj. Almost the entire half hour focused on Raj’s loneliness getting him down as he realized that everyone else around him had a girlfriend, or at least, a sort of kind of version in the case of Sheldon and Amy. It was starting to have an effect on his passion for D and D as well as his waistline as he wallowed in the midst of a Koothrappali pity party. Penny decided to step in and help as she fixed Raj up with a girl named Emily from her spin class.

Before anyone can stop and wonder how Raj can even date a girl when he can barely speak to them outside of a state of inebriation, well don’t worry, because the show has that covered. You see, Emily is deaf. So…it’s not like she can hear him anyway, but they manage to get some pretty good comedic potential out of this concept. Raj doesn’t know sign language, but Howard does so their first date includes Howard signing what Raj is saying. I love that the show found a situation where the normally openly inappropriate Howard had to actually be Raj’s filter before he messed up his opportunity with Emily. Let’s just say that cool and aloof doesn’t really translate in signing. 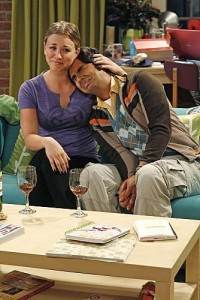 Emily with expensive gifts over the course of a month. I loved Penny’s reaction to the accusation that Emily could be a gold-digger, no matter her physical impairment. Poor sweet naÃ¯ve Penny. Even better, was when she confronted her about it via Howard at their shared gym as Emily cursed her out too fast for Howard’s hands to keep up. Of course when Raj’s parents threatened to cut him off for not dating an Indian girl, Emily changed her mind about dating Raj and he wound up in the comfort of Penny’s arms by episode’s end.

Unfortunately, this episode just showed how much Raj has yet to learn about dating and relationships. He acted basically like a total ass until he learned that it was easier to express himself by buying Emily things and I know that Raj can do better than that. It’s interesting that he keeps winding up in Penny’s arms one way or another, they have this sweet little chemistry together. While I don’t think they should date, I do like the growing friendship between them this new season. Besides, what’s more believable? All of the core four guys having steady girlfriends or having at least one odd man out, as it were, who doesn’t. It needn’t be a bad thing that Raj is single, if anything he’ll always have dinner company as his friends now also know he’s well-off and can always foot the bill, willingly or not. 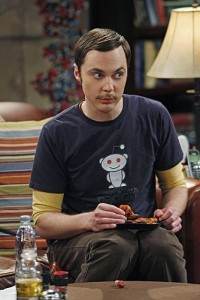 Sheldon shenanigans of the week: I’ve decided to start putting these in their own separate section since Sheldon hasn’t had as much in the way of pure plot lately as he has the decision to do various quirky activities. This week, Sheldon came to the decision that he was going to stop making most of his own decisions. Instead, he would roll his D and D dice in order to determine ‘unimportant’ decisions such as menu selections at The Cheesecake Factory or how much of his face he should shave. In typical Sheldon logic, he reasoned that doing things this way was opening his time up to put thought toward only important problems and ideas. Among other results, Sheldon found himself with a shabbily grown mustache and one dinner consisting of corn succotash, a pitcher of margaritas to wash it down with and in one lucky roll, a hot fudge sundae for dessert.