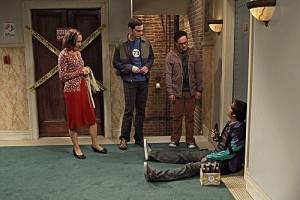 Sheldon Cooper will never grow up. It’s always been part of the humor of his character that someone so very intelligent could be so immature. This season on The Big Bang Theory there seems to be a recurring theme of not only addressing his unchanging ways, but also to perhaps attempt to start changing aspects of his immaturity and dependence on the ways he’s refused to see beyond. What better way to do that than by having a visit from mama Cooper?

We’ve met Mary Cooper a couple of times before, but never has she been in the majority of the episode like she was last night. She’s visiting California while on vacation before she heads out on her Christian cruise, yes you read that right. While there, she wants to spend time with not only her darling ‘Shelly’, but also his friends. Her visit was a perfect time to point out and address the various issues our favorite characters have been dealing with lately without having them whine about their problems all on their own. It’s a neat little guest star trick shows like to use from time to time, and Mary Cooper was at her best while she moved around Sheldon’s social circle–solving problems with her unique perspective on the World. Loved Leonard trying to stay on top of correcting Mrs. Cooper whenever a racial epithet would casually tumble out despite her best efforts at trying to say what’s ‘better’ now. She’s definitely a product of her upbringing and generational beliefs so when she says something a bit off-color, well she is trying at least to change that. Though they really did milk having her character say such things as a way to get to be more ‘outrageous’ than normal.

Back to Sheldon, I loved that his mother didn’t spend the entire trip just waiting on Shelly’s every beck and call for fried chicken and pecan pie. She’s clearly trying to grow as an individual and would like to visit 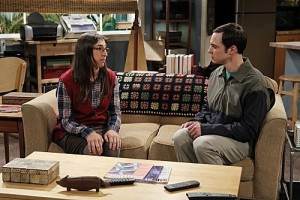 Sheldon sometime and see that he’s done the same; even if it’s only in some small way like not having to have his way all the time. While voicing her concerns about her son throughout the episode, Mary acts as an advocate of the audience themselves. Fans of the show do legitimately wonder what the deal is with Sheldon and Amy, for an example. As well as when Raj will finally be able to talk around women. Laurie Metcalf is right up there with fellow maternal member of the TBBT recurring family, Christine Baranski who always so memorably portrays Leonard’s less than nurturing mother. There were a couple of times this episode where I was sure that the cast themselves were about to crack around Metcalfe’s sharp-tongued comedic delivery punctuated with a sassy twang. Not to mention, seeing her sing the infamous ‘Soft Kitty’ to recently ill Sheldon was a nice moment between mother and son who, no matter how many cultural differences they have, will still have their close bond together as family. Even if making Nobel laureates want to cry isn’t something they both take great joy out of doing.