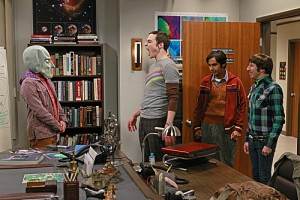 It’s all about trick or treat on the latest episode of The Big Bang Theory as Sheldon declares a prank war after falling victim to shenanigans at the university late one night. Outside of the trick part of the episode, Leonard discovers a real treat: a hot girl who’s into comics and him as well. Will he cheat on long-distance girlfriend Priya?

Everything starts off with Sheldon working late in his office when your standard set of creepy circumstances occurs: lights going out, eerie voices echoing from down the hall, and blood-scrawled messages with improper grammar on the walls. Ever the logical scientist, Sheldon mocks most of these happenings until Howard and Raj come forward as the would-be pranksters. Admitting defeat they all head back to Sheldon’s office where, unbeknownst to Sheldon, a masked Leonard is still lurking in the shadows. Level-headed logic cannot compete with a well-planned scare tactic.

The next day, Sheldon and the other boys wind up at their favorite local (and just so very DC-saturated) comic book store to browse the back issues when that rarest of creatures, the hot pierced-up ‘alternative’ chick, strolls into the shop and sends Stuart into a memorable fit of nervousness. Undeterred from that attack of awkward social graces, Alice (Courtney Ford, formerly of Dexter and, recently, True Blood) goes up to Leonard. The two flirt over a shared want of a particular issue, (of a Dark Horse property which somewhat stunned me as I figured they’d both want a DC book such as Green Lantern or Batman). She gives him her digits and leaves the shop as a stunned Stuart declares Leonard worthy of the Wall of Heroes for talking to a girl successfully within the store’s walls.

Throughout the rest of the episode, we see Sheldon attempting to get back at Howard, Raj, and of course Leonard as well by using a variety of techniques ranging from snake in the desk to electric hand buzzer. Nothing works until the end of the episode and it led to the new best Bazinga moment ever. Sheldon+ zombie paint+sneak couch attack = perfect retribution. 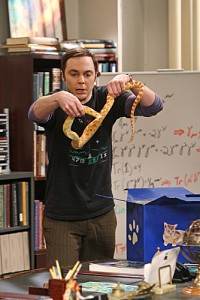 Regarding Alice, Leonard does go hang out with her and it becomes a little something more. After he feels immediately guilty and goes to Penny for advice. Poor Penny with her wine and gigantic bowl of macaroni and cheese being asked for relationship help by her ex-boyfriend. I swear they’re making her sadder by the episode these days. Leonard is seeking validation for wanting both Alice and his girlfriend, Priya but of course we all know that he’s too good of a guy to go on like that. So he breaks it off with Alice and decides to come clean right away with Priya. Unfortunately, Priya won the contest as sleeping with bests small make-out session every time. I can’t be the only person who was glad that the Priya thing seems to finally be over. I’m excited to see more of Alice with Leonard considering that she really seems to be, on paper anyway, quite a good match. As a final note, we didn’t get to see any Amy in this episode and for a Halloween episode that’s such a disappointment. She could have helped Sheldon with his prank war, or at least give Penny someone to share her mac ‘n cheese with.