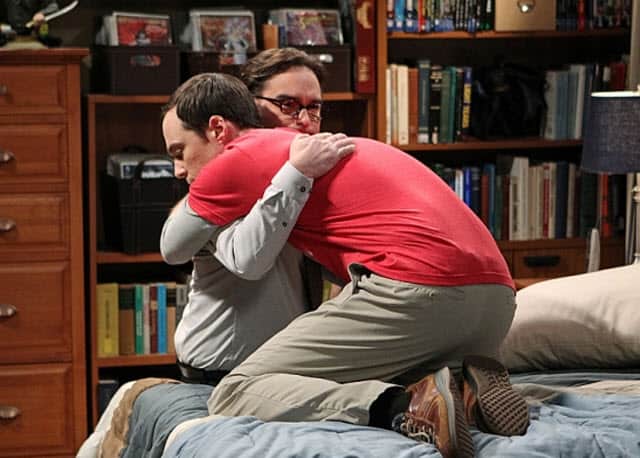 In the newest episode of The Big Bang Theory, I felt like I could be sitting in the four man main geek circle, with the look of a kid’s face on Christmas morning, as they couldn’t wait to explain and tell the punch line of the May the 4th Star Wars Day meme to Penny. She of course did not show the excitement that they had hoped for.

Just like real life, where your world can turn a complete 180 at the drop of Thor’s hammer, the gang received some bad news of the passing of one of Sheldon’s childhood heroes, Arthur Jeffries, also known as Professor Proton (Bob Newhart). You never know how anyone will react to death but Sheldon looks as if he is not bothered by the news but is totally bothered by Leonard trying to awkwardly hug and comfort him, and that the funeral lands on the highly planned out Star Wars Day.

As much as Sheldon admired Professor Proton and says he is one of the reasons he got into the science field, I was a bit surprised that Sheldon decided not to go to the funeral, but then hearing that he doesn’t want to be around all the people blowing their noses brings it back to Sheldon’s usual way of thinking.

Any time you hang out with friends for a long period of time attitudes and interests and other things tend to rub off on you. Nothing shows this better than when a few of the Star Wars Day gags the boys have set up Penny knows and understands the meaning. You can see she is somewhat thinking that maybe she is spending too much time at Nerdville and could be questioning why she doesn’t spend more time with some of her old friends. In my opinion though, she knows that there is no place she would rather be than with her friends across the hall from her apartment.

I can understand a little of what Penny is feeling and thinking in a sense that I had been to some funerals as a young kid but no one that I was really close to. I would think that as an aspiring actress she would have been able to cry on cue, but maybe that’s why she hasn’t hit the big time yet.

As the episode progresses I can see that Sheldon is bothered by the death of Professor Proton more than he is willing to admit. After being reminded of the changing of the Raisin Bran box tragedy, Sheldon runs to his room and after a while starts to drift off to dream land. Arthur visit Sheldon in his dream and yet again the excellent comedic style of Bob Newhart is seen. Sheldon is for sure that this dream visit can only mean that Arthur is there to Obi-Wan him, a Star Wars movie reference of Obi-Wan Kenobi’s spirit form coming back to mentor and teach Luke Skywalker. Some good special effects ensue with turning Arthur into a glowing spirit form and waving a lightsaber.

I did enjoy the concept story of Leonard and Penny’s marriage proposal contest and Leonard having the upper hand for a little bit. When a man has the upper hand in a relationship, even if it’s for brief moment, men around the world can stick out their chests a little more.

This episode brought us another great Sheldon touching and memorable moment. Arthur finally gave Sheldon the advice that he needed. Sheldon has had some great people that he has looked up to but they have all gone away. Arthur reminds him though that it’s ok to be sad about those that have gone on but just to remember to appreciate those that are still around…good advice for all of us! Sheldon is awakened by his best friend coming in to check on him and as Leonard is describing the funeral, the same Sheldon that didn’t really like Leonard hugging him, without thinking twice about it, wrapped his arms around Leonard. What a great moment! The great moment is short lived though, as the usual Sheldon snaps back with his bossiness of making the guys watch all the movies again.

We were teased slightly at the end that maybe Professor Proton could still make some appearances in Sheldon’s dreams, but it is sad to think that this could be his last time on the show.

Once again TBBT served up a great show with laughs and touching moments. One episode left of this season and we will all be ready to move to the darkside after having to go the summer without new episodes.

“Howard, I think you of all people should avoid espousing the principle that if something is not our favorite, we should just get rid of it.” – Sheldon