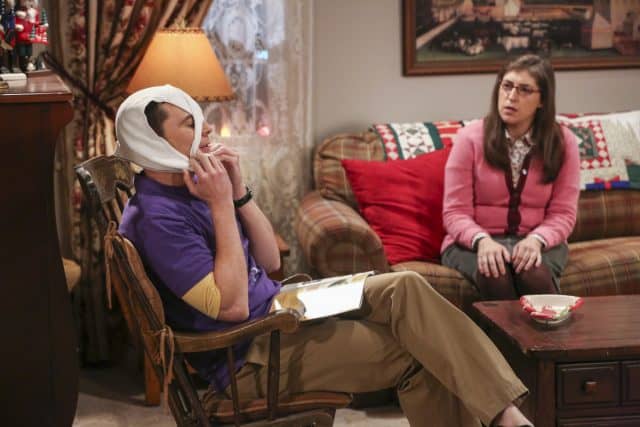 Some shows have actual hiatuses for the holidays, whereasÂ The Big Bang Theory,Â as they are wont to do, just took a few weeks off and got back at it. This time, instead of airing a Christmas episode as the fall or winter finale, they waited until after the holidays and recapped them through flashback. Flashbacks are a hit and miss storytelling device, but they worked pretty well here. Rather than tell a Christmas story with these characters, they made it much more like returning to work or school after the holidays, which was overall a pretty nice touch.

The departure in story structure forÂ Big BangÂ was a solid victory. Really, any show that’s been on the air for 10 years or more needs to shake things up whenever possible, and this was a really creative way to tell a Christmas story in January.Â The Big Bang TheoryÂ doesn’t frequently use flashbacks. In fact, I can only recall the episode in which the characters recall how they met each other (Sheldon’s old roommate told Leonard to run). In any case, it worked well. The characters in present were able to just quip and wisecrack, which is a strength of the show, and the flashbacks did the brunt of the storytelling.

Other than that, there’s not that much to pick apart in the episode. The best flashback was easily Amy and Sheldon’s trip to Texas, featuring the wonderful Laurie Metcalf as Mary Cooper. Sheldon’s temper tantrum (pictured above) was classic, and Sheldon still makes for the best jokes after 10 years.

The most relevant to me was Howard and Bernadette’s, as I had a somewhat similar experience with my daughter’s first Christmas. What I can tell you about Bernadette’s behavior is that it was realistically portrayed.Â Big Bang Theory,Â when it wants to, tells strong stories with relatable characters. I won’t say they do it all the time (they don’t), but this was a great one.

Overall,Â The Big Bang TheoryÂ got a strong 2017 start. The change in format worked, and overall it was a funny, well-made episode. Perhaps more shows should do a “Holiday Summation” instead of half-baked Christmas episodes. But hey, what do I know?

What did you guys think? Did you enjoy the episode? Are you happyÂ Big Bang TheoryÂ is back? Let us know!

The gang recap their holiday adventures for one another on this week’s hysterical episode of The Big Bang Theory.