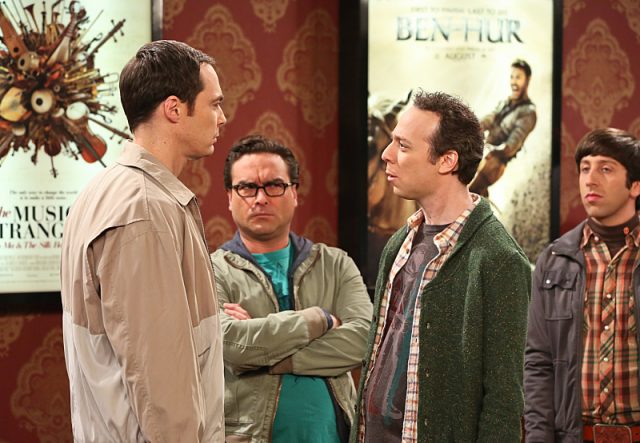 AsÂ The Big Bang TheoryÂ approaches the finale of its best season in a long time, I was ready to be underwhelmed. I expected that this episode would provide little substance, saving all of the game changing plot twists for next week’s finale. However,Â Big BangÂ proceeded to impress me, much like it has done all season long. I expected little, but my expectations were exceeded in every way.

This week onÂ The Big Bang Theory:Â Leonard’s mother is coming into town, but he successfully pawns her off on Penny for an evening. Penny, wanting her mother-in-law’s approval, invites her to have dinner with the girls. Unsurprisingly, Dr. Hofstadter is more impressed with Bernadette and Amy. Meanwhile, Sheldon hires Stuart to do things for him, including go shopping with (and apologize to) Amy. The boys wait in line to see a screening of the Avengers with Joss Whedon, and Sheldon predictably causes problems in line.

As I said, admittedly, I was wary of this episode before it began. I expected all the energy to be spent on the finale, and (with no basis other than my own biases) was ready for a stinker in the penultimate season nine episode. I’m happy to report that this was not the case, and instead, many laughs were had. The emotional stakes were high and the laughs came rolling in.

I really loved everything involving Penny and Leonard’s mom. Penny, though she first got jealous of Bernadette and Amy’s favor with her, was the first person to get Dr. Hofstadter (played masterfully by Christine Baranski) to admit a dormant feeling of any kind toward her son. I was surprised, but pleased at the emotional payoff when she admitted she was upset to not have been invited to Leonard and Penny’s wedding. You read that right. Leonard’s mom actually has some feelings for him! Who knew!?

My favorite part of this episode, though, was Stuart. This was probably the first episode in 9 years in which Stuart found himself doing more than delivering one liners or behaving like a sad-sack. Though still in that vein, the decision to supplement Stuart’s income by having Sheldon pay him to do things was great. But, when Amy paid him to give Sheldon a tongue lashing, that was when the episode really got cooking. Kevin Sussman has always been a skilled comedic actor, and seeing that in action was simply delightful. Assuming we don’t get a more emotionally powerful story from Stuart down the line, we may have seen peak Stuart in this very episode.

As you can see, this was a strong episode. It had both strong emotional stakes and enough laughs to go around. Honestly, we could end the season here and I’d be happy. But, it’ll be nice to have a ribbon tied on the plots set up during this episode. Hopefully the finale will have this fantastic season go out with aÂ Bang.

The Big Bang Theory airs its Season Finale on Thursday, May 12th at 8/7c on CBS

Sheldon hires Stuart to do things for him, while Penny bonds with Leonard’s mother on this week’s hilarious episode of The Big Bang Theory.