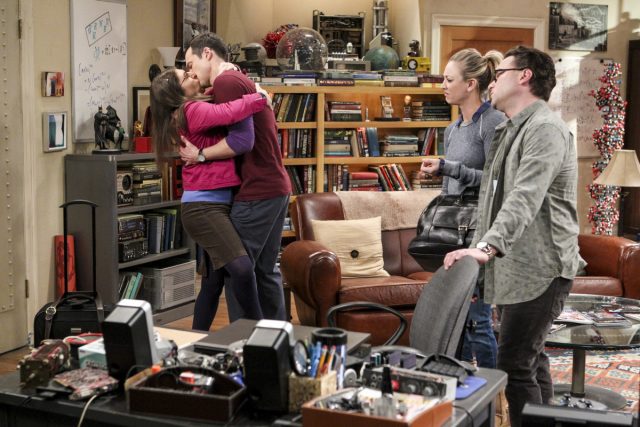 I’m never sure how to react toÂ The Big Bang Theory. On the one hand, they’re telling some real human stories about real relationships that hit close to home. On the other hand, they tell dumb, slightly funny stories about Howard and Raj trying to evade the creakiness of the floor in Halley’s room. I would say that they’re getting mixed results, but yet, I can’t look away.

This week onÂ The Big Bang Theory:Â Howard and Raj work to “fix” the creaky floor in Halley’s room. Penny believes that Leonard may be taking her for granted, so she takes Amy on a spa weekend to clear her head. Sheldon, meanwhile, is working on taking an interest in other people.

Big BangÂ still has an uncanny ability to make me laugh, but I think the storytelling has fallen off a bit. The Howard and Raj story, or as I like to call it, the “goofy” story. There’s always one plot within an episode that doesn’t have a point to it other than pure silliness. Usually, they’re funny enough that I don’t complain, but this just wasn’t funny at all. Sure, Howard and Raj had some good lines in there, but it really didn’t click at all.

This episode seemed to illustrate two polar opposites ofÂ Big Bang Theory.Â At its worst, it’s a show about Howard and Raj finding idiotic solutions. At its best, this is a show about humanity and realistic problems. Leonard and Penny are a great example. Martial spats or ruts happen. They don’t always result in divorce, they just happen and people work through them. Leonard and Penny worked through an incredibly realistic situation and did so truthfully. Well, truthfully until they asked for a relationship agreement. No one would ever do that.

Finally, there’s Sheldon’s growth. Sheldon asking about how others are doing, and memorizing weekend plans of others are just a way to establish growth in the character. Its never been more evident that Sheldon is maturing, both in and outside of his relationship. One of the best parts of the later seasons of the show is the evident growth Sheldon’s character, and how he’s grown to be both tolerable and care about other people.

Here are a few thoughts/funny moments:

All in all, the good parts of the episode won out over the bad. I don’t think there would be anything wrong with occasionally cutting an irrelevant story and leaving Â a few characters out. They leave Stuart out all the time, so I don’t see what’s so hard about giving Howard and Raj the day off. But, the emotional beats landed and the growth in Sheldon makes any episode easier to swallow.

Leonard and Penny have a disagreement, which could be solved by Sheldon’s relationship agreements on this week’s The Big Bang Theory