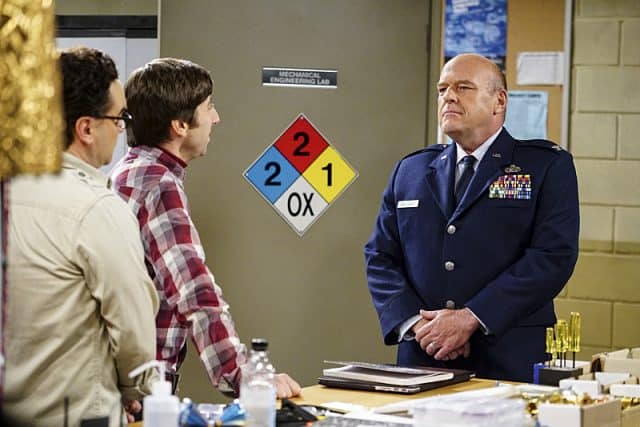 We’re past the premiere and now the fall TV season is in full swing, meaning lots and lots of new episodes ofÂ The Big Bang Theory. It’s honestly impressive that they can maintain this level of quality after 10 seasons. I’m still laughing and enjoying nearly every episode. Though, granted, it’s pretty easy to make me laugh.

This week onÂ The Big Bang Theory:Â Howard, Leonard, and Sheldon meet with Colonel Richard Williams (Guest Star Dean Norris) regarding using the navigation system for military use. Sheldon over promises how long the project will take. Bernadette is upset that people at work found out she’s pregnant, and even more upset when she finds out Penny let it slip.

I’m intrigued by this invention story. I think it’s really interesting, and has the potential to be entertaining regardless of whether they actually complete the project in time or not. Dean Norris was a great choice to be their military liaison, and I hope we continue to see him. I was, however, disappointed that he’s an engineer and not a geologist (Marie! They’re MINERALS!).

The Bernadette story is far more poignant and relevant than the other. Though both stories are pretty deeply rooted in political issues, Bernadette’s is much more obvious about it. She doesn’t want to lose an opportunity at work because she’s pregnant. This is a real issue that women face all the time. The duality of having a family and a career has been difficult for some people to achieve, and they’ve worked hard in their careers. As a straight, white male, I really have no idea about these things, except that I always try to go by what people can handle at work, and not their life situation. Either way, this was a good, well-told story that made a relevant point.

For someone in the background, Raj nailed all of his one liners and bits in this episode. That’s one of the great things about this cast, is that even when seldom used, they can all carry a story. Usually, it’s Sheldon’s name we see repeatedly, but the whole “Sheldon can’t talk” rule pushed the others to the forefront.

It wasn’t a particularly groundbreaking episode, but it was funny and enjoyable. It also kicked off a few stories that are bound to be more interesting as the year goes on.

Howard, Sheldon, and Leonard meet with the military about the navigation system, on this week’s funny episode of The Big Bang Theory