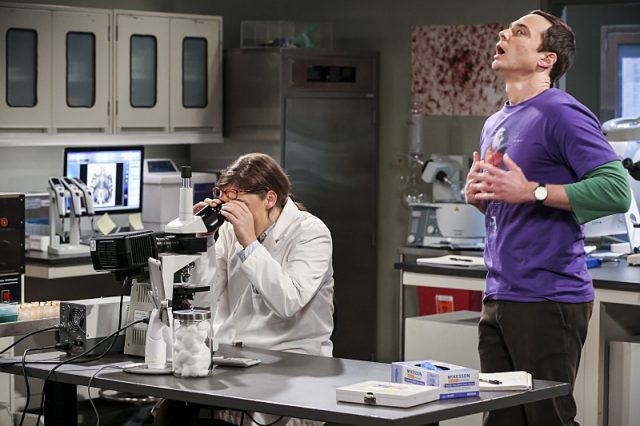 I can be in the worst mood, feeling so cynical, and prepared at any moment to write an awful review of a show that I love but can sometimes be rote and boring. ButÂ The Big Bang TheoryÂ continually surprises me at how much growth it shows in its characters, and how different and interesting their stories can be, even ten years in.

This week onÂ The Big Bang Theory:Â Sheldon and Amy combine their skin cells to create a small brain like cell, which sends Sheldon into “baby crazy” mode. Raj meets a woman at the University, and he tells his friends she’s an astronomer, even though she is the cleaning lady.

These stories sound simple enough, but both were quite satisfying. Sheldon’s story of trying to seduce Amy because he wanted to have a baby was a lot of fun. Playing seduction had to have been a blast for Jim Parsons, especially that Flamenco dance he did. Sheldon and Amy have both evolved immensely in recent seasons, not only evidenced by the fact that Sheldon actually want to be intimate with Amy, but also that Amy was able to resist him by any stretch of the imagination.Â Big BangÂ is always at its best when showcasing growth.

For another example of growth, look no further than Raj. Early in the show, Raj couldn’t even talk to women unless he had been drinking. In this episode, Raj, who is Indian, was able to ask out and spend time with a Hispanic woman, and television viewers everywhere rejoice at the incredible diversity. Not only that, but Raj being a scientist and Isabella being a cleaning lady implies the racial and social norms for their home countries are being waived in favor of spending time with one another. For a show about mostly white people, Big BangÂ doesn’t fear diversity.Â The only thing that bothered me about it was that she gave up and caved to his continued advances too soon. There’s no reason for that.Â Make him work for it!

Of course, here are some of my favorite moments from the episode:

All in all, this was more evidence thatÂ The Big Bang TheoryÂ can create funny episodes out of any subject matter. Simple (Raj and Isabella) or complicated (whatever the heck it was that Amy and Sheldon created),Â Big BangÂ has something in it for everyone. This was a solid episode.