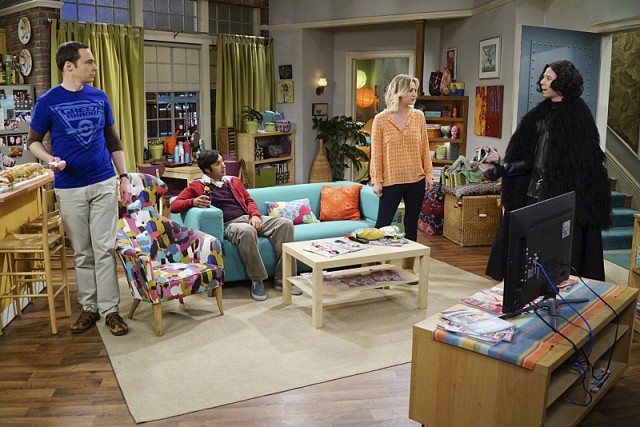 The mark of a great, long-running sitcom is how it bounces back from a bad episode. The last new episode was one of their worst of the season, butÂ The Big Bang TheoryÂ made up for it in basically every way with this episode. The characters were all used and developed, and it was not short on humor.

This week onÂ The Big Bang Theory:Â Leonard and Sheldon are having everyone over to watchÂ Game of Thrones.Â When Sheldon mentions their quarterly roommate agreement meetings, Leonard refuses to go. The rift between Leonard and Sheldon quickly spreads though the group, separating into Â two viewing parties. Â An unexpected allergy scare puts things in perspective.

The best part of this episode for me was the turnaround for Raj. In the last episode, he was drifting toward his sad-sack tendencies. But, this week, Stuart returned as the ultimate sad-sack and Raj looked like a player by comparison. Or he’s actually a player, but hey, good for him! Any way you look at it, Raj’s dating two women provided some really great, funny moments, even though we all know it will blow up in his face later.

Season 9 for me has meant a lot of self-deprecation and acknowledgement of character flaws forÂ Big Bang.Â Some of the problems in earlier seasons was this show accepting the status quo, and this season has done nothing but challenge it. “The Viewing Party Combustion” accurately depicted some of the unhealthy relationships that the show has driven home over the years, and pointed out real flaws in the way that the characters interact. In many ways, it was a departure from the norm, and it worked well. It was REALLY funny.

It was hard for me to stop laughing long enough to take things down, but regardless, here are some of my favorite quotes/moments from the episode:

As you can see, there was plenty to laugh at in this episode. Even the stuff I missed, with all of the bickering among the cast was really great. Of course, it only took their friend being seriously endangered to put their friendship back above everything where it belonged. Perhaps what this season has done best is turn these sometimes caricatures into realistic characters. I’ve been really enjoying it, and I’m sad that it’s almost over.

Leonard and Sheldon’s watch party for Game of Thrones goes south when Leonard expresses his distaste for the roommate agreement meetings in this week’s excellent Big Bang Theory.