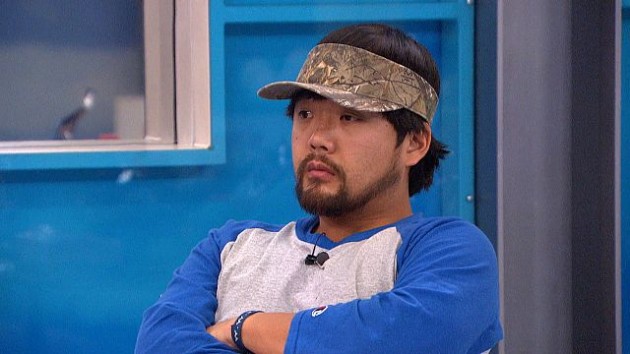 The first endurance HOH competition kicked off at the end of Thursday night’s episode of Big Brother after Julie Chen announced that the Battle of the Block was done for the season. With the stakes raised even higher, knowing that whoever won the endurance comp would have guaranteed safety this week and the two nominees would only have one chance to save themselves, the game changed again. On top of that Vanessa, Clay, and Shelli had just blindsided James, Victoria, and Meg by sending home their closest ally in Jason. They weren’t the only ones afraid of the block this week, though, with Austin and the twins all believing that they may be targeted as well.

Obviously, with so much doubt and fear in the air, everyone played their hardest in the HOH competition. The grueling endurance comp required the houseguests to stand against a wall on a small platform as the wall tilted forward and cold rain and eagles attacked them. These competitions have been done in Big Brother in past seasons, and almost every time, the muscled up men fall off first. This season was no exception, as Austin was the first to fall despite being promised a kiss by Liz if he won HOH. He made up for us not having to watch another disgusting kiss by staring creepily at her throughout the competition.

In the end, it came down to just three houseguests left: Shelli, James, and Johnny Mac. On opposing sides of the house and with some recent bad blood between them because of Jason’s eviction, both Shelli and James were holding on for dear life. Johnny Mac was just staying on because he was having a blast. Despite not fully trusting James, Shelli made a deal with him that if she dropped, he wouldn’t put up her or Clay at any point this week. Neither even considered Johnny Mac, who got tacked on to the deal when James remembered to tell him he wouldn’t go up either. But the real issue here is how dumb of a decision that was for Shelli.

Understandably, Shelli didn’t want to win another HOH because she had already won two and didn’t want an even bigger target on her back. The problem with that is that there was already a HUGE target on her back and no one in her alliance stepped up to win the competition. The only way she could have guaranteed her own safety this week was by winning herself. Additionally, in the deal she made with James, she only asked for her and Clay’s safety, leaving out Vanessa completely. It was those two who convinced Vanessa to save Austin and put up Jason last week and yet clearly she isn’t all that important to them in the game. With James, Meg, and Victoria already upset with her and Clay about Jason going home, the last thing she wanted to do was anger one of her own alliance members.

They should have seen it coming from miles away since they did the exact same thing last week, but Shelli and Clay were still shocked when James decided to nominate them both right from the start. He wants to guarantee that one goes home and knows that even if he had only put one of them up, the other would have been mad anyway. Clay and Shelli are trying to act like they’ve played a decent game, never lying or doing something this horrible to someone. Truth is, though, that they just can’t see their own behavior for what it is.

If the houseguests were smart, they’d send Shelli packing this week (that is, if she doesn’t win Veto). She’s clearly the brains behind the operation, and Clay would fall apart without her. Or maybe he’d just mumble his way to the end. Either way, Shelli is a much bigger threat to the other side of the house and they’d be wise to realize that. At the same time, other players continue to do nothing in the house, which is rather frustrating. Maybe next season, after five evictions, if a certain player or two has done literally nothing, they should just be automatically evicted.