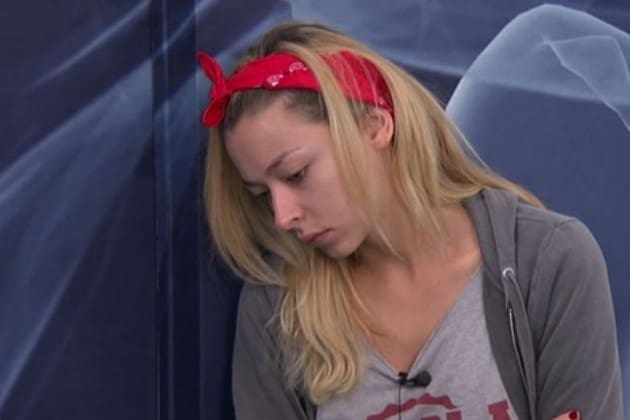 With half of Clelli evicted, the HOH competition on last night’sÂ Big Brother was an important one for both the Sixth Sense alliance and the other side of the house, which consists of James, Meg, Jackie, and Becky. While still at a disadvantage numbers wise, the unnamed foursome alliance seems to be stronger in every other way that counts. As opposed to the Sixth Sense, who are constantly throwing each other under the bus for their own advantage, this “come from behind” alliance knows how to communicate and work together for the good of everyone involved. Sometimes being the underdog can work to your advantage, and for them, it definitely does.

As predicted, we were shown last night what went down right before the big eviction on Thursday, surprising everyone when Clay went home over Shelli. Like most of the time in Big Brother, a conversation between two people got relayed to someone else, who relayed it to someone else, and it all ended up twisted. It all came down to Clay telling Vanessa that Johnny Mac told him that James told Johnny that Vanessa was coming after him. If that even makes any sense.

In reality, Johnny Mac was the one who came up with the idea himself that Vanessa and Shelli were working together and weren’t to be trusted but that’s not how Clay interpreted their conversation. It led to another emotional outburst from Vanessa, who you’d think would be better at keeping her cool seeing as she plays poker. Thinking Clay was purposefully lying to her, all of this drama ultimately led to him going out the door and landed an even bigger target on Vanessa’s back.

Because of all this, the HOH competition was an important one, and there was a clear standout from the start. Through it all, Becky managed to maintain a pretty impressive lead. She’s gradually started becoming an actual player in this game (unlike Steve whose strategy is apparently to do nothing), as she’s gotten closer to James, Meg, and Jackie. By the end of the competition, she had not only won the HOH, but also earned herself five thousand dollars and the guarantee that she’ll never again be a have-not. The real question though was what she would do with the HOH power.

It quickly became clear that Becky had a plan, and a good one at that. Last week, they had discussed taking out the remaining member of Clelli this week, but as we’ve seen often this season, the HOH did not want to follow the plan. Instead, Becky wanted to throw the Sixth Sense off by nominating Shelli and Steve, letting them believe she was still on board with taking out Shelli. Her real goal, however, is to blindside Vanessa, who has had a hand in eliminating almost every single houseguest this season.
At this point, Vanessa more than deserves to go home. She hasn’t been able to keep her emotions in check during the game and is way too obvious about what she’s doing. Her gameplay has been messy, and her paranoia at this point is just plain annoying. I’m firmly on board with the other side of the house and hope that Clay and Vanessa are just the start of them slowly picking off every member of the Sixth Sense.