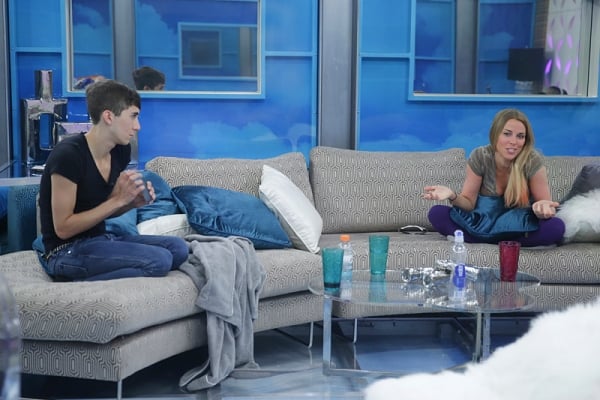 With two players making questionable game moves last week, one causing unnecessary drama with other houseguests and the other lying left and right to everyone, it’s no surprise that Da’Vonne and Audrey are the main targets this week on Big Brother. This early in the game, it’s the people who stir up trouble instead of laying low that are easily targeted, and both ladies have found this out the hard way. But with Battle of the Block being in play again this season and two HOHs being crowned each week, just because someone is a target for one of the HOHs, doesn’t mean they are for the other.

At the beginning of last night’s episode, we saw Shelli and Becky sit down and talk game with each other for the first time this season. Being co-HOHs often inspires people to strategize together who wouldn’t have had the chance otherwise. They both seemed in agreement for the plan that week, to backdoor Audrey. After trying to pin an attempt at an all girls alliance on Vanessa and being caught in her lies once again, the whole house has pretty much had enough of her. Everyone seems to realize that she is not to be trusted and will say or do anything to benefit herself. All in all, not a great person to be in an alliance with.

While all of this may be true, Shelli isn’t as on board with the plan to backdoor Audrey as she appeared to be with Becky. It turns out that there’s someone else in the house that Shelli trusts even less than Audrey, knowing that she will never be able to build trust with this person. With the big blow up last week between Clay and Da’Vonne, it’s Da’Vonne who Shelli and Clay are more worried about. They believe that since Audrey is completely alone in the house right now, they could offer her some kind of deal for saving her this week, taking out a bigger threat to their game instead.

Right now, Becky believes that Shelli is completely on board with the plan to backdoor Audrey but clearly Shelli is having other ideas. Regardless, they went ahead with the plan to mostly put pawns on the block this week, with the exception of Shelli nominating Da’Vonne. Because of their rocky history, Da’Vonne seemed to be expecting this and is ready to fight for her chance to stay in the house. She’s also got Jason and possibly even James behind her to help rally votes if need be. Along with Da’Vonne, Steve and John found themselves on the block again, probably because they haven’t been playing a great social game. Becky also nominated Jason, who had put her on the block the week before.

What Becky doesn’t know though, is that Clay and Shelli approached John, asking him to throw the competition so that Da’Vonne remains on the block and Shelli remains sole HOH. John was once again smart enough to go along with what the HOH wanted, therefore not making himself a target. He isn’t doing anything substantial in the game but he also isn’t making waves. When it came time for the Battle of the Block, John barely needed to do anything to throw the competition, as Da’Vonne took care of that all by herself. Things went exactly as Shelli planned, leaving her in power this week and setting the stage for her to eliminate Da’Vonne instead of Audrey, like the whole house believes.

Wednesday night’s veto competition will be an important one, as it will likely determine whether Da’Vonne or Audrey goes home this week. Or perhaps someone else will make a grave mistake, angering the wrong person and placing a big enough target on their back to be sent home instead. With so much up in the air and the house unknowingly divided on who they want to send home, the Big Brother Takeover, which will allow one houseguest to pick three others who won’t get to vote during the live eviction this week, could have a huge impact on the game.