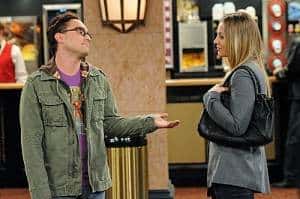 It’s sort of surprising that Penny and Leonard haven’t done anything together under that all too confusing label of ‘just friends’ since they broke up. But in tonight’s episode, the pair give the idea of just hanging out with ‘sex completely off the table’ a go. Meanwhile back at home, Sheldon learns to get over a life-long fear with the help of Amy and Bernadette.

Leonard and Penny meet up in the beginning of the episode and make plans to go to the movies together as friends only. When they get there, things begin typically enough with Penny forcing her choice of movie on Leonard (something with Jennifer Aniston of course). But Leonard suddenly comes to the powerful realization of how different things can be when you and your former significant other go out after the relationship has ended. This cocky take-charge Leonard uses his newly found powers for what some would say is evil, as he tells Penny that they will be skipping the latest insipid rom-com in favor of a documentary. About a dam. He also makes Penny pay for her own ticket as hey, let’s be honest, when it’s not a date that is exactly how things should be–pretty girl or not.

Following the movie, Penny and Leonard go out for a bite to eat when Penny decides to gain some revenge on Leonard for the choice of movie. She starts flirting with a handsome ‘ironic geek’ type with agreeable bone structure. Once he realizes what she’s doing, Leonard finds his own cute girl to do some less than successful retaliation flirting with. It’s pretty apparent that with this story-line, the show is starting to inch the audience back toward the idea of Penny and Leonard being together. It was healthy for them both to come clean about the little white lies they told during their relationship; perhaps in an attempt to try again at it in the future. I may not be one of the Leonard/Penny shippers out there, but I can get behind any story that brings Penny back into the forefront of the show. She’s been on the sidelines an awful lot lately. 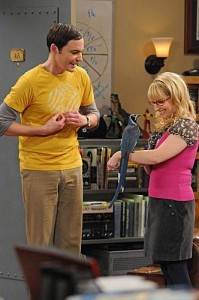 Back to Sheldon and what he deals with when Leonard’s out for the evening. Before Leonard left, Sheldon was getting frantic at a rather large bird that has nested outside of their window. If memory serves, they’ve mentioned Sheldon’s distaste and downright fear toward birds before, and of course this situation proved no exception as he struggled to shoo the bird away from his window. After running through the gamut of ideas including making cat sounds, calling animal control, and finally devising a high-pitched bird-deflecting noise emitter (which only succeeded in shattering all of the glass in their windows), Sheldon calls on Amy and Bernadette to assist him in avian removal. Part of me wonders if Howard and Raj got to watch any of Stars Wars on Blu-ray while Sheldon was dealing with his ornithological problem. The girls, (also in Sheldon’s mind the best-suited to deal with a bird problem as they’re the biologists of his core of friends) assist Sheldon once he makes the mistake of opening the window and allowing the bird to fly into the apartment.

By being able to overcome his fear of birds, Sheldon makes another of his many small steps toward being able to socialize properly. Of course, it was Amy Farrah Fowler who said what some of us might have been thinking, in that how come Sheldon can get used to being affectionate toward a small animal, but he freaks out (as we saw last week) whenever he has to comfort another human being? Even though the Leonard and Penny situation was clearly the big focus of the episode, Jim Parsons again stole the show with his performance as Sheldon anxiously tried to get the bird to go. I can’t be the only person who wants to see the return of the egg that was left behind when the bird left in a future episode right? Seeing Sheldon care for it is a premise that sounds a bit clichÃ© on paper, but this show is spoiled with a beyond-capable cast that are able to really sell the sometimes overly ‘sit-com-y’ scenarios they get to perform.

– ‘I’d like to report a dangerous animal. A Blue Jay. This is animal control, I don’t understand why all the laughter.”–Sheldon upon attempting to call on Animal Control to deal with the bird.

– “No, you always picked and it was always the same. An hour and a half of beach-houses in the rain until the woman turns around and realizes, ‘love was here all along!’–Leonard describing his movie-going experiences with Penny picking the films they see.

-“To this day I can’t see a Sandra Bullock movie poster without getting both bored and aroused.”–Leonard to Penny again about her taste in movies.

-“I’m pushing play. I mean it! If we don’t start soon, George Lucas is going to change it again.”–Howard about the Star Wars Blu-ray waiting to be played as Sheldon deals with his bird issue.

-“Hummingbirds are pretty.” ” Hummingbirds are the vampires of the flower world.”– Raj and Sheldon talking about the differences in the ways they see Hummingbirds as Sheldon goes through his long history with birds having it in for him in some way.

-“Guess you gotta have hollow bones to get some sugar around here.”–Amy regarding Sheldon’s nearly instant bond with the bird while she remains in the limited-affection zone.

-“Get back here you stupid bird so I can love you!”– Sheldon once the bird flew Casa de Cooper.