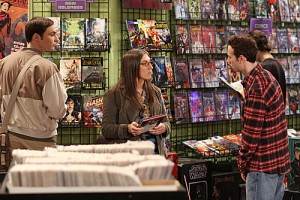 Tonight’s episode of The Big Bang Theory centered on dealing with kinds of remorse, now hang on a minute, no one breaks up or dies or anything. But the geek’s variety of buyer’s remorse is a very real thing. It afflicts countless collectors the World over whenever an expansion pack or worse yet, a special collector’s edition of an item one already owns is available on the market, and with better added features. If you continue to resist, you may well eventually come to regret it. Leonard, Raj, and Howard deal with trying to keep from getting ensnared in the countless special editions of a card game that have been directly marketed toward them, (who would win in a one on one fight between Billy the Kid and the White Wizard anyway?) While Sheldon attempts to avoid a more personal brand of remorse that of preventing the loss of a relationship, as he finally decides to cement what he has with Amy Farrah Fowler.

Amy tags along with Sheldon for new comic book night and while she’s less than impressed with Sheldon’s chosen vice she does manage to walk out having attained the interests of comic shop purveyor, Stuart. The two decide to go out on a coffee date after Amy gets some advice from Penny and Bernadette about whether or not she should, considering how she’s technically somewhat with Sheldon. Meanwhile, when Sheldon isn’t dissing Leonard’s ‘˜stalled’career, he’s forced to come to terms with whether or not he’s truly okay with the idea of Amy dating another guy. Sheldon goes through all of the modern-day stages of denial when someone else is dating your ‘˜ex’. He attempts to distract himself with pursuit of his hobbies (the card game with the boys), monitor the new beau’s Facebook page for pertinent relationship status updates, and he even goes so far as to attempt to ask Penny out on a date to potentially make Amy jealous.

When all is said and done however, Sheldon winds up taking Penny’s advice as he straps on a pair and finally asks the question fans have anticipated since he and Amy became ever more serious together: will you be my girlfriend? Of course, with Sheldon saying yes to the question comes with a freshly printed copy of the Relationship Agreement and that previously untouched physical boundaries will remain as such. Hey, at least now they’re official…officially still the same unconventional couple it’s a delight to see navigate the travails of their relationship every week. It’s standard Sheldon Cooper to make a huge leap on paper while still never really having taken a step forward. It’s basically like if Sheldon and Amy were the card game from the episode and their newest expansion pack included bonus exclusivity and relationship confirmation. As for that card game, I don’t blame Leonard at all for breaking down and getting the collector’s tin–that Sherriff’s badge/wand is sweet.

– A. Comic books employ storytelling through sequential art, a medium that dates back 7,000 years to the cave paintings of Lascaux. And B. you play the harp, like that’s cool. –Sheldon’s comeback to Amy’s less than enthused response to new comic book night.

– I’ve passed many an exciting evening playing this game. and I’m sure it’s a lot more exciting when you play with other people.— Amy extolling the virtues of Twister.

– Amy, little vixen! Working it under all those layers of wool and polyester!— Penny after Amy gets asked out by Stuart.

– Hang on a second, are you telling me that Sheldon’s patented combination of condescension and no sex isn’t enough to hold onto a woman?— Howard reacting in faux shock at Sheldon’s less than conventionally affectionate manner toward his girl-slash-friend leading to the possibility of him losing her to Stuart or another guy.