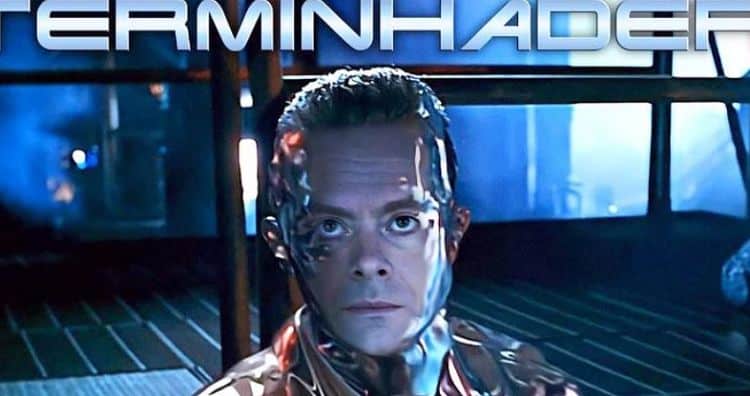 There’s something so inherently disturbing about seeing Bill Hader’s face on the T-1000 versus that of Robert Patrick, and maybe it has something to do with the idea that most people firmly believe that Hader is supposed to be the funny guy all the time, which doesn’t sound too far off the mark. Anytime a comedian can pull a straight face like this it is kind of disconcerting, especially when the theory that comedy comes from depression and other, darker places is brought into the mix. But then watching Hader execute the beat down on Arnold’s T-800 is even more freaky since his deadpan look is just, yeah..wow. The added footage of the T-1000 melting just a bit here and there was kind of interesting since it didn’t make it into the theatrical version, making it feel, to the audience at least, that the T-1000 was somehow aware of the danger, but was firmly set on its mission. That’s the thing about terminators, they don’t need anything to make them appear any more threatening, they’re already plenty scary given the missions they’re used for and the idea that they don’t stop until they’ve achieved the goal. But people are willing to push the envelope and tear that sucker wide open at times in order to show just how much worse it could be. Robert Patrick was scary enough for the role back in the day, but thanks to Deepfake, Bill Hader is even more terrifying simply because people know who he is and know that his serious face was likely to freak people out.

Of course if one really wants to go there, the whole idea of AI is enough to unnerve some people since the implications and applications are already pushing a line that a lot of people feel isn’t entirely safe. Max Tegmark of Future of Life has more to say on this. There have been plenty of strides forward with AI technology, but one has to wonder how much of it is entirely necessary, and how much is going to come back and bite humanity in the end. That sounds like a lot of paranoid talk really, even to me, but at the same time it’s enough of a warning signal to think that working with AI and advancing it to the level that machines will be able to think for themselves is kind of like trying to prove the movies right. Again, it’s paranoid and not entirely grounded in reality, but the idea that a machine could think for itself and come to the conclusion that humanity is a serious problem not just to its own existence, but to their own, would be kind of creepy. It would also mean the movies were being prophetic in a way that people would never let go of after that, but the hope is that people in the real world will be reminded that science fiction is at times wise to pay attention to when trying to see how far they can push the limits as they pertain to how humanity and machines get along.

Deepfake is, for this purpose, sheer entertainment and not really to be taken as anything but, though some people do find issue with the software and the implications that it could be used maliciously if someone had it in their head to do so. Liz Tung of WHYY had something to say on this topic. Given that it’s still not perfect and would require a truly gifted technician to really make the kind of video footage that would fool pretty much anyone, including someone of equal or greater skill, it’s safe to state that such a thing isn’t fully possible yet. It’s easy to imagine the idea of identity theft spiraling out of control if such a thing happened, not to mention the idea that a person could be framed for just about anything, or replaced entirely within a movie to push to new generations, even if that doesn’t make a lot of sense. The applications that Deepfake could be used for appear numerous at this point, but whether or not anyone will actually have the gall to try it has yet to be seen. For entertainment purposes it’s great since it’s not really hurting anyone and is giving off kind of a ‘what if’ vibe that is interesting to watch given that some of the videos that have been put out are kind of interesting really when viewed. The one of Jim Carrey’s face being placed on Jack Nicholson’s body was equally creepy, since once again it’s a comedian being given a serious role that could have been made so much worse if only because the normally comedic faces that Carrey was known to pull could have been absolutely horrific in The Shining. From an entertainment standpoint, Deepfake is a lot of fun at this point, leaving no doubt that those that have an issue with it are thinking along different lines than the rest of us.