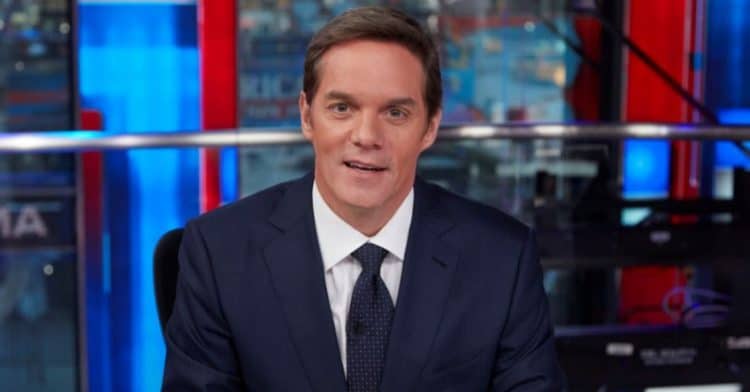 https://www.yahoo.com/entertainment/bill-hemmer-inherit-shepard-smith-171125993.html
Bill Hemmer is a journalist you see regularly on your television. He works for the Fox News Channel, and he’s based out of New York City. He is on the air every morning for “America’s Newsroom,” on which he anchors with another journalist. He’s not always been part of the Fox family, but he’s been there a while. His journalistic history expands many decades, and it includes longtime work for networks such as CNN. Because he’s been around so long, many people who see him each morning have become familiar with him and his life, but you probably don’t know too much about the man who was recently chosen to take over the slot previously held by Shepard Smith. Here’s what you’re missing.

Bill Hemmer, or William as he was born, is from Cincinnati. His mother and father lived there, and his father worked there as an executive for a company that manufacturers mattresses. He spent his entire life here while his father kept his office. His mother was a homemaker who took care of him and his four siblings. That’s right, he’s one of five kids, which means his parents were amazing, obviously.

When he was nothing short of a teenager going into his senior year in high school, he and a friend decided to start their own radio show. They spent their time outside of classes playing different songs and DJing for their friends for 15 minutes every single day. That was something they did for fun, something we are certain their friends and fellow classmates loved, and it was the moment he realized that broadcasting — in some capacity — was the right choice for him. You could call it a pivotal moment in his life when he made the decision to go on and do something big, and it worked out.

When he went to Miami University — not located in Florida, but located in Ohio — he joined a frat, he studied hard, and then he decided that he would take some time to study in another country. While some of us never did that, it seems like something many people benefit from. He went to Luxembourg to study there at his university’s campus on that side of the world. It was an experience not many kids get to have, and it worked out well for him while he was there.

4. He Supports the Vets

If there is one thing that he is into and that he is proud of, it’s his support of the Veterans that take care of this country. Bill Hemmer is a man who knows the value of hard work and the sacrifice that the men and women in the military make when they are overseas, when they are away from their families, and when they are not working a traditional job. He supports them in every endeavor. He goes to events, he raises money, he helps where he is needed. He is a man who does good things.

He was born and raised Roman Catholic, and he even went to a Catholic high school growing up. He’s never wavered in his faith, and he’s even had the opportunity to spend a week at the Vatican. He’s not shy about his faith, and we love that about him.

6. He’s Getting his Own Show

Now that veteran news anchor Shepard Smith is out at Fox, Hemmer is taking over his slot in the afternoons. His new show will air in January 2020, and we can rest assured it will be significantly different than anything that was already on the air. He is not at all like the man he is taking over for, and that is going to be a big change for viewers who liked Smith and his controversial methods.

He is not a man who is known for interrupting his guests or trying to put them in a situation that makes it easy for him to call them out or make them look wrong. He has more manners, and he is not known for being combative or anything of the likes. He’s a much calmer and much more in control kind of journalist, and that is what works for him.

You won’t find out much about him, even on the internet. He is a man who likes to keep his personal life personal. He’s not someone who brags about his date, who he is with, or what he is doing. He’s very private, and he likes it that way. He’s someone who doesn’t spend a lot of his time doing anything other than working, and spending time with his immediate family as they are close according to the rumors. He’s private, and we assume he will remain that way.

9. He Did Date a Supermodel

There have been a few rumors about Bill Hemmer over the years, including the fact that he might be gay because he is not a married man. However, he did spend nearly 8 years with supermodel Dara Tomanvich. She was his serious love, but that did not work out. They do not seem to be the kind of people who had a difficult split, but they did last a long time.

He’s not a man who likes to make his personal life public, and he doesn’t even use social media for that. He is a man who prefers to use his social media accounts for his work related issues, and he’s not one who will share too much of his life on them. Not one of his accounts is a very personal one, but if you want to find out more about his work, you can check them out to see what he is up to and how he is working out what’s going on in the office or in the news.