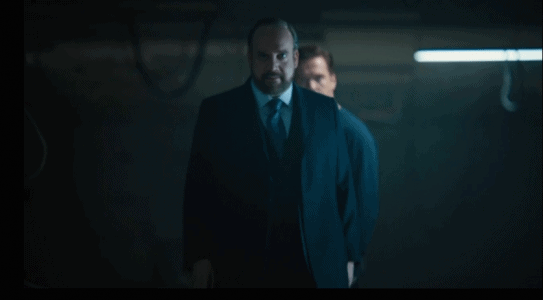 All shows,Â BillionsÂ included, learn on their feet. It’s a trial-and-error business, and you don’t know what you have until you’ve already made some of it. Mike Schur, creator ofÂ Parks and Recreation, once said that in a perfect world, you would write the first ten episodes of a thing, throw them away, and then present the eleventh. I think that holds true in nearly every case, with some notable exceptions.

I’ve been critical ofÂ Billions, but I’ve always been willing to give it leeway (and keep watching, which at some points I really did not want to do) because I believed in the creative team behind it. They were film guys, coming into TV, and that steepenedÂ an already verticalÂ learning curve. So, it’s no surprise that the eleventh episode of the season was the best one they had produced.

But this? This finale? This is on a different level. Fundamentally, it’s a different show. We don’t get to see the appalledÂ Wendy Rhoades try to keep herself from shivering, or the internal turmoil play out on Bobby Axlerod’s face if we’re still making the show where Chuck talks about being a chess prodigy. No, thisÂ Billions, introduced in the first season finale, is something else entirely.

“High concept” is a term that, according to Google, is defined as a “striking and easily communicableÂ idea”. It means, essentially, that the plot of a thing is what brings in audiences; that the core story of a thing is what matters. But anyone who has ever picked up a pen or typed on a keyboard or read a story at all, really, knows that this is a load of crap.

People came toÂ LOSTÂ for the mystery, sure, but that was always a convoluted mess; they stayed for Sawyer, and Sayid, and Kate (well, maybe not Kate). People didn’t watchÂ Buffy the Vampire SlayerÂ because they were on pins and needles worrying about Glorificus; they did so because they cared about Buffy, and Willow, and Spike, and Dawn (okay, maybe not Dawn). Character is what matters; character is the webÂ in which audiences get entangled.

Billions, in it’s worst moments, cared too much about the plot. It moved too many things around, too quickly, either using periphery characters or ones we hadn’t met at all. Most of the plot points were, frankly, inscrutable. A lot of exposition had to be deployed to forge a path through the ever-growing weeds. But this season finale, after episode after episode of not really getting it, finally did.

Wendy Rhoades has been my connection to this show from day one. I love Maggie Siff, and I think she’s one of the most underrated and underworked and underpaid actors in the industry. She’s been great from jump street, often working with material I wasn’t fond of, but always managing to bring something to the scene she was in. So, it’s not surprising that, once they really dropped the hammer on Wendy, tat All-Pro skill came to the surface.

Everyone knows that shivering, shaking, light-headed out-of-body experience that Wendy had when she realized what Axe had on her and what Chuck had done. Your neck muscles don’t work, and your ears are ringing, and you feel as if you’re going to float up and up and up; then you crash, and rise up and up, and crash; and so on, and so on. The only reason you don’t vomit all over yourself is because your throat has already sealed tight.

Watching Wendy process what had happened was devastating. It was painful to watch. It was so Â good, that I can barely believe that I watched it. Maggie Siff is the best actor on a show that includes two heavy weights and a number of title contenders. When Wendy gets that five million from Axe, and walks out the door, IÂ was elated. This was the character work that I had been waiting for. This was the character work that’ll bring me back next season.

Billions isn’t perfect. It veers too often into the extremes, and the camp. The speech between Axe and Chuck at the end was near perfect, save the very end, when they pushed too hard on the seams and the tension deflated. In those situations, you want to be as simple and direct as possible, and that does not include references to Nagasaki and Chuck spreading his arms like he’s about to be nailed on a cross.

But those are little things.

BillionsÂ has found a way forward; a way into the arena of prestige drama that it so craves to be. If it backs away from the plot-centric, and away from the camp, you’ll have a show with real, lasting teeth. You’ll have a show that breaks hearts, instead of one that blows minds. Plot twists are cool, but nothing will be burned as brightly in your mind as when Wendy Rhoades walked out of Axe Capital.

Chuck is exposed, Axe wins and loses, and Wendy gets her in the first season finale of Billions.