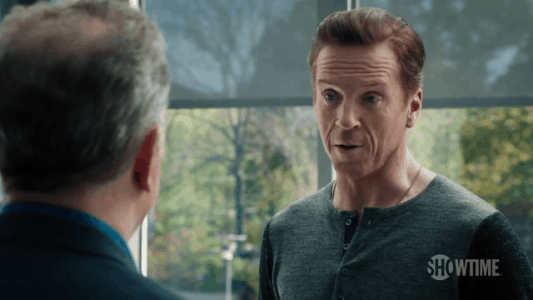 It’s interesting to me that the people talking about principles are the ones with so, so much to lose.

Kate’s father is obviously wealthy; perhaps obscenely so. In his meeting with Bryan, who he knows as a man of integrity and a man who works for theÂ District Attorney’s Office, he openly challenges him to an integrity-off. Why must government attack business, he says. We’re not all bad guys, he says. It’s unfair, he implies.

This man has never met Bryan in person, and yet he feels the need to lecture him on the slow “erosion” of Bryan’s morals, especially when it comes to releasing that chapter on Axlerod. The man finds it distasteful; he dabs at his lips with an expensive cloth napkin, drinking expensive wine, in a restaurant where the meals end up close to a thousand dollars.

What’s so interesting about this is that the only people who benefit from those “morals” are the ones already taking advantage of the system.Â It’s how it always is, isn’t it? It’s uncouth; it’s rude; it’s just obscene to discuss things like this! Where are the manners?

Axe is the same way; trying to flush out the rat, especially out of some sense of loyalty. The stupidity of it all. The working class gets gutted, and Axe makes billions, but oh no! How dare we offend your precious feelings, accusing you of being exactly what you are.

Look how proud he is, strutting around; he’s feeling so full after Horvath offered him nine million a year. He was too satisfied with himself to realize that Chuck as a lawyer means nothing to them; it’s his status as the DA that does. Them offering him a chance to play golf every day is as clear as sign of that as any direct words to that effect would be; that would replace him with a photo on a scarecrow or a wig on a mannequin if they that they could get away with it.

All of this money. Christ.

Poor Chuck, and his 185 thousand dollar a year salary. His kids don’t get to go to 70 thousand dollar a year private school; the humanity! He acts like being a “.gov lifer” is so noble, and so resolute; as if Wendy getting a job where she doesn’t make obscene amounts of money to placate low seven-figures investment bankers wouldn’t drive him to the nearest big firm. Chuck is allowed to be who he is because his wife is stupendously, unbelievably hella-rich; his nobility extends as far as the line of coins his wife leaves her in wake.

All of these people suck. Wendy sucks. Chuck sucks. Axe sucks. Even the kids suck, and they’ve had like two scenes. It’s so unbelievably privileged that I feel like it’s a test of some sort. Is this, like, a Netflix-esque algorithm to test how far audiences will go to support shows with unlikable characters? I mean, Christ Almighty; we’re at peak Unlikable here. I despise everyone on this show, even Wendy, who has revealed herself to be less a voice of wisdom and one who will justify the worst of both her husband and Axe so that she can remain where she is, because it makes her feel good. All that talk about getting in with clients who need her went away the moment Axe asked her to stay; the moment he gave her a crumb.

That’s the secret of this show’s success, you know; everyone is a villain. Everyone in this is playing a game with zero stakes. What do any of them have to lose? Respect of the non-billionare millionaire class???? The DiMonda article’ll hit Axe like a a two by four, but when he wakes up, he’ll have a bump on his head and a billion bucks in the bank. Congratulations, American legal system; you spent millions so that you could bruise his ****ingÂ feelings.

Donny is a double agent, of course. Bryan’s sinking into the muck meant nothing. None of it means anything. The real hilariousness of Kate’s father bemoaning Bryan’s erosion is that he never had any integrity to begin with. It’s just another narrative for him to spin once the press comes calling.

Now it’s a real battle. With Axe bruised, and Chuck reinvigorated, and Bryan letting the mud cake on his palms, the undercard is played out. It’s time for the championship fight.