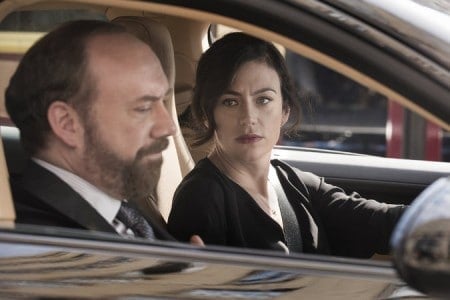 For the first time, I can say that I enjoyed the totality of aÂ BillionsÂ episode.

There are still some issues that need resolving; the banter, for starters, is still pretty poor. The scenes between Axe and his childhood friends are so transparently written to evoke friendship and longtime companionship that it breaks the dream. Wags is also a problem; his desire to have a one-liner in every conversation stifles whatever that conversation is about. Sometimes, the best option is to just play it straight.

The Decker scenes were also a little repetitive; every answer he gave was some variation on “Axelrod is a god amongst us”, and really didn’t give us anything new on him. There’s an argument to be made that was the point, but even if that was the intention of the authors, it fell flat.

Now that I’ve gotten that out of the way…

I expressed my admiration for Paul Giamatti’s Chuck Rhoades in earlier reviews. He was the only character, at the time, worth following; his complexities were front and center, and the side of the pool that he splashed around inn was infinitely more interesting than the heated jacuzzi of Bobby Axlerod. Until this episode, Bobby Axlerod was just another audience-informed genuis, whose true motivations and personality resided under a layer of lacquer so thick, you weren’t even sure there was someone there.

But the trip with his buddies to the Metallica concert was a game-changer.

The real Bobby Axlerod sprung to life in front of his friends. Once you take away the city and the suits and the grand, self-serving gestures of paying college tuitions, you find a real person beneath; and that real person is fascinating.

I find Bobby Axlerod to be less a genius, and more like a shark. He can smell blood in the water; he can feel the subtle shifts of energy around him. Decker described him as a man who has an enormous amount of information in his head, but that’s not it. Axe is quick, and acts quickly; in a business where thirty seconds can be the difference between thirty million and three hundred million, Axe makes decisions. That’s his greatest strength, actually. He isn’t afraid.

That lack of fear is deployed differently than his peers. They aren’t afraid, and continually make bigger and bigger risks. They toe the line on a trade; they make a little too much money; they run their mouths and stick their hands up shorter and shorter skirts. But while they aren’t afraid, they also, deep down, aren’t confident. They don’t believe that they can cut and run. They don’t believe that they can dump their losses and build a life elsewhere. The reason that Axe has survived so long is not so much because he’s infallible, but because he knows he is.

Decker has nothing, and never had anything.

It was a fascinating play for Chuck to make; to hit the parents, and force Decker into coming in. But Decker only came in because he knew he had so little to give. Decker has more money than Christ himself, and can drag out the trial and call in favors and get sent to Baby’s First Jail; no, Decker isn’t really all that afraid of the police. But he is afraid of Axlerod.

There’s always a bigger fish, and Axlerod is a bigger fish. People like Decker, with their hands in the system, aren’t a threat to Axlerod. They have too much to lose by stepping out of line and losing their heads. The people that do are the ones who are the up and comers. People like Mick Danzig, who are just important enough to skirt misdemeanors and just rich enough to be miserable, are the ones who bring the house crashing down. Danzig is drunk, and existentially breaking, and at his core is selfish and self-serving; he’s the dude who gets caught doing cocaine with strippers and speeding on the 405.

Axe goes on the trip to see Metallica, and he’s concerned. But it’s all on the periphery, and his buddies are here, and he trusts them. But then Freddie twists on him, and Alice shakes him, and he comes back to the office and he looks around he realizes: his second in command is a foul-mouthed loud mouth; Danzig is a ticking time bomb; Â Butch Probert openly questions him. Axe smells blood in the water, but this time, it’s his.

So he dumps. He dumps, and he’ll dump. Slowly, but all at once. He’s out, and he can rebuild. Axe Capital is a name, nothing more.

Chuck Sr put Chuck in a bad spot, and Chuck only grow more and more vulnerable.

Chuck plays by the rules, even if he bends them to do so. But he can’t keep putting out fires, and survive. See, people like Axlerod can take the hits, because ultimately, the money and power they possess isn’t given to those who are good. But Chuck is in a realm where the next man up is working right next to you, and the next man up for your replacement is working under him. People in Chuck’s position have to burn forests down to keep the fire from spreading, or else the line shifts forward, and he becomes the district attorney of Saratoga Springs.

But Chuck is losing. He’s always losing, because he’s one man and one department handling too many case loads. Chuck wants to take down Bobby Axlerod, but that means a settlement and few years in jail. He’ll never him that hard. If Axlerod felt that he was in enough danger, he’d be doing a lot more than he is now. Chuck is a powerful figure, and a possible candidate for mayorships and governorships someday, but when your opponent has as much cash on hand as the federal government and even those that dislike him refer to him as a demi-god, you might as well peddle your wares elsewhere.

Unless, of course, you’re willing to go down with him.

Chuck proffers with Decker, Axe takes his buddies to see Metallica, and both deal with the fallout of a disastrous short sale in episode four of Billions.