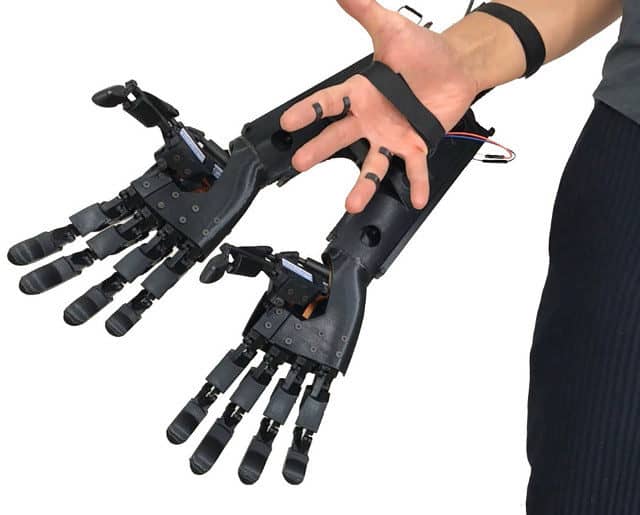 So these bionic hands turn a regular hand into two robotic ones. I was kind of waiting to see a practical application put forth with this invention and I’m sure there is one but until it’s seen this is just a cool gadget that has no real use in society. Plus, if the simple finger controls are all it takes to open and close the hands then how do they become dexterous enough to perform other functions such as grasping, pinching, or even lifting? This looks like a cool invention, that much is too obvious, but it also looks like it might need a few kinks worked out since the current design seems to indicate that it’s all show and no go. I might be wrong, lord knows it’s happened enough times, but at this moment it seems like a cool gadget and nothing else.

It also seems a little limited in scope since there’s not a lot of things I can think of that would be able to support two hands in such close proximity. The design makes it look like they would just get in the way of another unless they were to work in tandem on the same task. Entire robotic arms might be an idea, but that would mean a whole lot more work, research, and money spent making the things. Plus I can only think that some special harness would have to be made to accommodate a new arm.

This idea has some merit but it needs to go back to the drawing board for some fine-tuning. It could be useful for amputees if the hands were geared towards connecting somehow so that the individual could manipulate them into moving. As they sit now though the hands are just too close together and aren’t a practical choice. For lifting and other menial jobs they might be okay if you can get them to work in tandem, but anything else seems like they’d be just a waste of time right now. That’s hard to say since the technological advance, or the likelihood of it, could see these robotic appendages as a very useful tool, but only if they manage to make a few changes that could possibly make them even more impressive.

I know, I know. I’m a writer, not an engineer, so what do I know right? Just looking at these things is enough to impress me but really looking at the way they’re constructed doesn’t make a lot of sense. I get people wanting to have more than two hands since a lot of folks state that they need a few extra hands to help them out from day to day. But what this looks like it would do is really limit people more than help them since not only would it take time to master the things but it would require positioning them just right in order to avoid knocking down one item after another on accident.

It’s a good idea and very impressive but it needs a little more work I think.