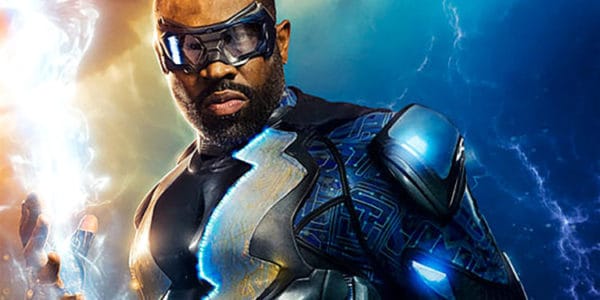 Black Lightning…”This is an American story, this is not a black story…” showrunner Salim Akil stresses to EW, “We’re going to be culturally specific, but universal in our themes so everyone can see themselves in these stories.” Â  Mr Akil talks about a show grounded in a family, in it’s primary characters’ roles as husband, father, high school principal, daughters, students, sisters, and in community. Â Showing the humanity of his villains, Akil deliberately shuns the villain of the week approach. Â He’s also open to crossing over with the other CW superhero shows, but he wants time for his characters and stories to develop.

Black Lighting tells the story of retired superhero Jefferson Pierce‘s return to crimefighting. Â There was a time when Jefferson Pierce believed he could help more people by educating teenagers and making his school a refuge from violence in streets and homes. Â But when gangleader Tobias Whale levels a personal threat against Jefferson’s daughters, that time is past. Â Jefferson feels compelled to use all his talents and abilities to protect his daughters and their city. Â Jefferson must also mentor his daughters in using their powers for good. Jefferson must once again fight crime and injustice as Black Lightning.

Mr Akil describes Jefferson as a character, “The beautiful thing about Jefferson is that he’s a dad, he is a husband who loves, he’s a principal who cares. All his human qualities are based in love and caring. As a superhero, he’s an extension of his personal life, right? Black Lightning is an extension of Jefferson’s personal life – the principal, the father, the husband, the friend, but then that’s what we can call the daytime Jefferson, the light Jefferson.” Â Jefferson is also an olympian who competed under the stars and strips of the American flag. Â He’s a selfmade man who trained his body as an athlete and his mind as a teacher. Â In this respect Jefferson represents what all Americans aspire toward. Â “He is the American dream,” said Akil.

Jefferson also embodies the duality of not only the Rev. Dr. Martin Luther King, Jr but also Malcolm X. Â Jefferson “knows that there’s a dark side to the world, and he doesn’t want to just build a wall and stay on the light side of the things.” Â Sometimes Jefferson won’t be able to turn the other cheek as Dr. King or Gandhi would have done. Â Sometimes he fights back like a Malcolm X, a Frederick Douglas, an Alan Keys or a Clarence Thomas.

Mr Akil says that Black Lightning deliberately shuns the villain of the week approach. Â Mr Akil grew up in a some rough neighborhoods in the San Francisco/Oakland area of California. Â In his youth, Mr Akil knew some people who did terrible deeds but who also personally helped him out of some terrible situations. Â Akil says their humanity didn’t excuse these men from the consequences of their bad acts, but it did make them more complex and interesting as people. Â Akil wants to give that kind of humanity and complexity to Tobias Whale, Jefferson Pierce/Black Lightning’s main antagonist in the show’s beginning. Â To show the layers and humanity of his villain, Akil is willing to devote the screentime and his writers’ creativity.

Speaking of the upcoming season of Black Lightning, Mr Akil said, “hopefully this season everybody will just get to know them [his characters] and get to respect them and accept them for who they are before we start making other moves.” Â When asked about a crossover with other CW superheroes, Akil says, “Yeah, I’m not opposed to it at all.” Â Mr Akil wants to take the time to establish the humanity of his characters and the reality of the world they inhabit before he brings them to the other CW superhero shows. Â And let’s remember the specific context of prior statements regarding Black Lighting and the Arrowverse. Â The prior statements specifically answered questions about the fall 2017 Arrowverse crossover episodes. Â Black Lightning does’t even hit the CW’s airwaves until 2018.