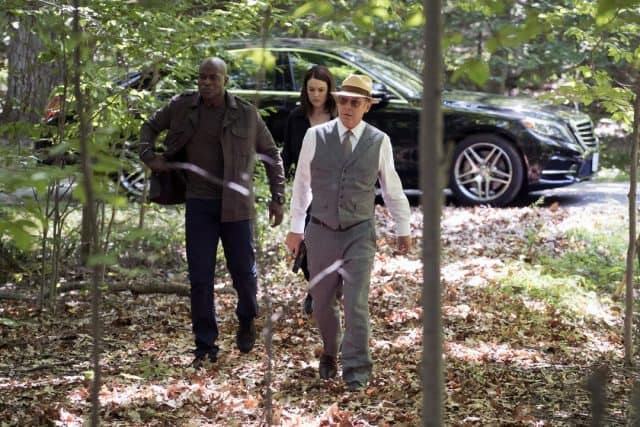 I loveÂ The Blacklist.Â I really do. For the most part, it’s a show that packs a double dose of everything I like in a show. It’s action packed, slightly humorous, and contains seriously compelling drama betwixt its credits. Sometimes, though, the 22 episode traditional season for a network can really feel like it’s treading water. Unfortunately, this was one of those times.

This week onÂ The Blacklist:Â Liz and Tom are offered a video stream to watch Agnes. Tom, against Liz’s wishes, has it tracked and chases after her. Reddington and the task force look for a blacklister who can help them get to Kirk. The team reacts to Samar’s request for transfer, and Aram is not too happy about it. Mr. Kaplan’s “rescuer” is revealed.

On the surface there are some great elements here. The drama around Samar’s leaving the team is really compelling. Though I disagree with Samar’s reason to do so, and the fact that Aram doesn’t just come out with the “I love you”, there is plenty of compelling drama here. The show often centers on Liz, Tom, and Red, and will occasionally forget this wonderful cast of characters they have. Mozhan Marno and Amir Arison both did incredible, top notch work in “Gaia”.

On the other hand, we have the Tom and Liz stuff. I mean, they are acting like a regular old married couple in the sense that Liz explicitly told Tom not to do something and he did it anyway. But that’s pretty much marriage in a nutshell. Maybe I just don’t like that they’re using the baby as a bargaining chip, but none of the Agnes plot sits well with me at all, save for that wonderful scene at the end between Liz and Red.

The blacklist villain was awful though. I mean, the actor was fine, but the roundabout plot to find Kirk was just silly. If they’re going to maintain this villain of the week format going forward (which, creatively, I honestly don’t think they need), the villains are going to have to be more compelling. Until this villainÂ was dead, and we found out something was wrong with his son, I cared about him zero. But his son elicited some real emotion from me.

Here are a few other thoughts while watching the episode:

So, in conclusion, this episode was fine. It wasn’t groundbreaking. The talented cast carried a somewhat thin episode, but it’s still enjoyable to watch as always.

Reddington, Liz, and Dembe chase down a lead, while Tom takes justice into his own hands, on this week’s episode of The Blacklist.