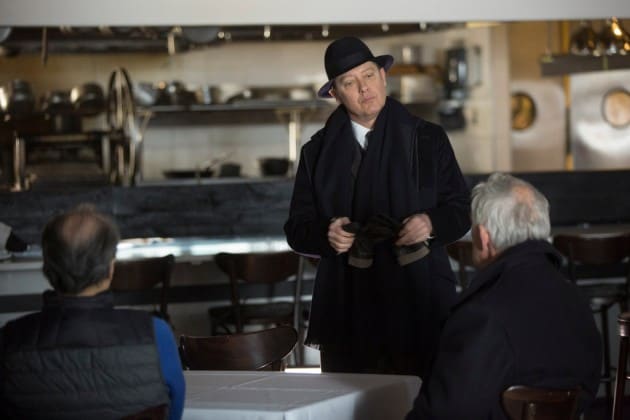 The Blacklist, to stay relevant, must continue to combine the powerful procedural action that the series uses on a weekly basis with its ability to tell a interesting, comprehensive story. I don’t watch a ton of procedural shows, so the over-arching story must be compelling to keep my attention. This week,Â The Blacklist proved that it can stay atop both elements, even with a “clip show.”

This week onÂ The Blacklist:Â Reddington hunts Tom, with the help of Agent Ressler. Agent Cooper is issued a subpoena in the murder trial investigating Agent Keen. Agent Keen is forced to recall everything about the task force to a judge, to prove the need to throw out Agent Cooper’s testimony.

Wow. I’ve been saying for several weeks now (since I addedÂ The Blacklist to my docket, actually) that Megan Boone has come a long way as an actress in her short time on the show. I’ve never believed that more than right now, after this episode. Ms. Boone has upped the emotional stakes slowly but surely in every episode that she’s been in. This episode was meant to be Keen-centric, and I loved it. Most people who watch the show for James Spader (which I’m not going to lie, was the big draw for me in the first place) might disagree with me, but Boone carried this episode.

This is perhaps the most clever “clip show” I have ever seen. The show has been building towards the consequences Agent Keen is facing for keeping Tom alive and torturing him for information, but to put everything in a clip show like that was brilliant. It also reminds you why the show is great. All of the great task force exploits, with Reddington right in the thick of it. What a wonderful way to briefly relive a show that you love.

My only beef with the episode, really, was the lack of Reddington. As the episode was Keen-centric, Reddington was reduced to supporting player. He did a marvelous job, teaming with Cooper and Ressler to do everything he can to get “Lizzie” out of trouble. Of course, he was ruthless and did everything he could to get to Tom. Of course, we all know that next week, Tom earns himself a spot on the ‘list. Perhaps the most powerful scene of the episode, or in the last several episodes, is when Dembe (who rarely speaks) tells Reddington that he should tell her (Agent Keen) the truth. Reddington always has on a brave face. He’s always got an angle, and you don’t know which way it’s going until it’s too late. However, the vulnerability conveyed by Spader in that moment was so fresh and real. It proves that there are real layers to Reddington, and I can’t wait to see the show explore that further. I can accept the lack of Reddington in the episode overall if it continues to produce moments like these. I always want to see more Dembe, too.

All in all, a wonderfully different episode ofÂ The Blacklist.Â Different structure, but same tense, gripping show that we all know and love. I don’t know about you, but I’m really excited to see Tom get hunted next week.

What about you? Did you enjoy this week’s episode? Let us know in the comments!