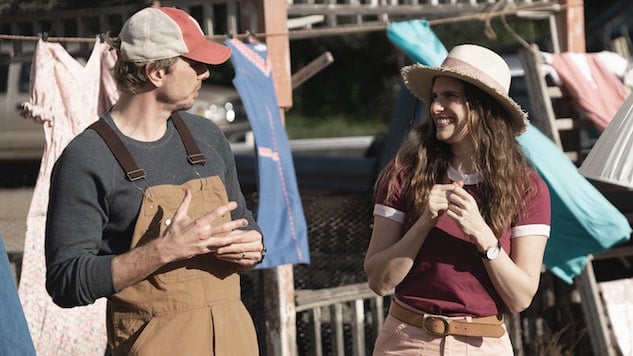 As pointed out by Variety and other sources, Bless This Mess can be summed up as a “fish out of water” sitcom. For those who are curious, a pair of New Yorkers named Mike and Rio have made the choice to quit their jobs so that they can move out to a farmhouse situated in the state of Nebraska. Suffice to say that the two have no experience with farmwork whatsoever, which is something that serves as a major source of comedy for the sitcom.

2. Started Out As a Fox Pilot

Deadline has stated that Bless This Mess started out as a Fox pilot. However, it winded up becoming an ABC sitcom for the mid-season because ABC wanted something similar whereas Fox was much less enthusiastic about the whole prospect.

3. Was Impacted By the Buyout of Fox

It seems that one of the reasons that Fox was less than enthusiastic about Bless This Mess was because of its buyout by Disney. Simply put, the new Fox head Charlie Collier was no more than a few days into his new job when he was asked to make a final decision on the sitcom. As a result, he was reluctant to give it the go-ahead because he had a very understandable desire to get a better grasp of Fox as well as how Fox would perform under its new circumstances before taking such a chance.

4. No Real Need for the Sitcom At Fox

With that said, there were plenty of other reasons why Fox had no real interest in another sitcom. For example, Fox leadership had already decided to give the go-ahead to two new animated comedies. Combined with the respectable performances of both Cool Kids and Last Man Standing, Fox wasn’t particularly in need of another sitcom to pad its lineup. On top of this, it should be mentioned that Fox has a pretty strong sports lineup in mind as well, meaning that it had a reduced need for sitcoms in the first place.

In contrast, ABC had a much greater need for a mid-season sitcom. This was because some of its recent choices resulted in holes in its lineup that needed to be patched up, thus making Bless This Mess a very convenient choice of filler. With that said, the mid-season tends to be a pretty rough time for a show to start up, so it will be interesting to see whether Bless This Mess can make it past its initial season or not.

6. Seems to Have Low Stakes

So far, Bless This Mess has been pretty low-stakes in the sense that it doesn’t seem as though the main couple are risking much by making such a radical change in their lives. This is something of a disappointment because it suggests that the sitcom won’t have much seriousness injected into it if at all, which is a style that suits some viewers much better than others. However, the sitcom has just started up, meaning that there is still room for it to change as its cast and crew continue to come together.

7. No Mention of Politics

Speaking of which, a CNN review seems disappointed that Bless This Mess makes no mention of politics whatsoever. On the one hand, this is understandable because it isn’t uncommon for people to seek out refuge from politics in their entertainment. On the other hand, this is one of the factors that make Bless This Mess seem like insubstantial fluff because one would expect politics to come up under the circumstances that the sitcom presents. Due to this, the total absence of politics makes Bless This Mess seem fake, which is a real shame because there are plenty of sitcoms that have managed to show that it is possible for them to tackle serious issues while remaining funny.

8. Relies on Other Sources of Humor

Instead, Bless This Mess seems to be reliant on sources of humor that have no connection whatsoever to the most popular issues of the times. For instance, its chief sources of humor so far have been the poor condition of the farmhouse, the complete unpreparedness of the main couple, and the oddities of their neighbors. With that said, time will tell whether Bless This Mess will expand beyond this very limited scope.

For those who are curious, Bless This Mess was created by a team-up between Lake Bell and Elizabeth Meriwether. Generally speaking, people will know Lake Bell because she is an actress who managed to make a successful transition to being both a director and a screenwriter. Meanwhile, Elizabeth Meriwether was the one who created Single Parents, meaning that if viewers liked that particular ABC sitcom, they might like this one as well.

With that said, some places such as Pajiba still see potential in Bless This Mess. Essentially, its reviewer thinks that the overall narrative of the sitcom could move in interesting directions from this point forward. Moreover, its reviewer believes that it might be worth waiting for the cast and crew to come together to see what they are really capable of once their early season shakiness wears off. As such, people who like the basic premise of Bless This Mess might want to continue following it for a while even if they weren’t particularly impressed by its initial showing.