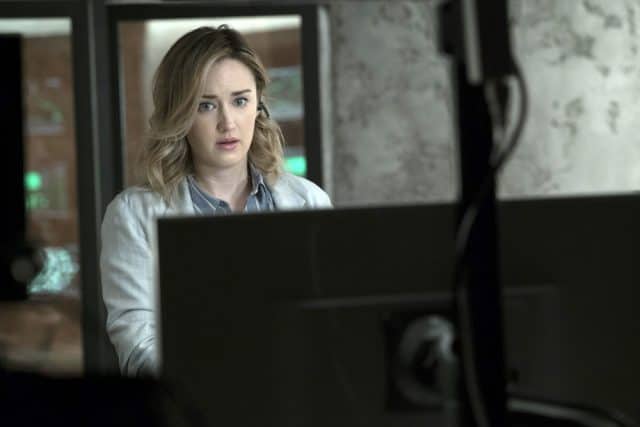 It’s fall finale time forÂ Blindspot, so it’s time to finally find out who the Sandstorm mole in the FBI really is. Let’s take a look at what happened in the mid-season finale, “Why Let Cooler Pasture Deform.”

The episode opens with Jane and Roman on a Sandstorm mission, and we can really see the hold that the organization is beginning to have over Jane. More than ever, it’s going to be difficult for Jane to accomplish what she wants to for the FBI while keeping Sandstorm in the dark, and it’s super fun watching things play out in this way. Jaimie Alexander has given a really strong performance since the beginning ofÂ Blindspot, and her current double-agent story has allowed her even more opportunity to show off.

The stakes get incredibly high as Sandstorm prepares to launch Phase 2, and the entire team is forced to work as quickly as possible to prevent this from happening. The story that plays out is easily the most intense of the season so far, and it starts to remind us what makesÂ Blindspot so special (as the past few episodes, honestly, haven’t quite lived up to the standard that the late-first season set).

The big reveal of the episode is the identity of the mole, and it ends up being exactly who we all expected since finding out that someone in the FBI had been keeping tabs on Jane. The backstory makes perfect sense, but the predictability does diminish the effect a bit. What I’m more interested in seeing is how the reveal affects the rest of the team as we move forward (particularly what it means to Patterson), but we’ve got a few weeks to wait before that happens. Still, I do like how well the backstory for it worked, and it’s nice to see how it was clearly planned since (nearly) the beginning of the series.

A great aspect of the episode is the way that Sandstorm takes Weller out of the game for a bit, and it gives us a small chance to see Sullivan Stapleton deliver a more emotional performance that we rarely get to see on the show. It’s a gentle reminder that when Stapleton is given the right material, he is absolutely fantastic in this role.

I’m not going to spoil too much about the episode specifically, but it did play out the way that it really needed to, more or less. For a mid-season finale, I was left satisfied, and that’s really all I can ask for. The cliffhanger at the end should prove enough to bring people back when the show returns in a few months, and I really can’t wait to see where things go from here after what we’ve now seen set up in “Why Let Cooler Pasture Deform.”

What did you think about the mid-season finale ofÂ Blindspot? Did you expect the mole’s identity to be who it was? Let us know your thoughts in the comments down below!

The mid-season finale of Blindspot‘s second season accomplished everything that it needed to in a satisfactory way while leaving viewers on a cliffhanger that should bring them back.