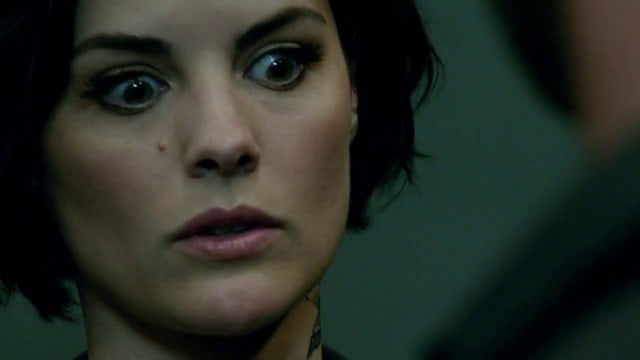 Blindspot returned in a big way last week with its mid-season premiere, so let’s jump right in and take a look at this week’s new episode, “Scientists Hollow Fortune.”

The episode opens with Jane and Oscar discussing her first mission now that she’s more aware of what’s going on. She still isn’t really into doing what he’s telling her, but the thought that it was her plan and the knowledge that Oscar will tell her more is all the motivation she needs to make a bit of an effort. I’ve got to admit, I’m really intrigued by this new dynamic onÂ Blindspot. It’s interesting that, this early in the series, we’re already getting a new (potential) drive for the narrative in an episode, and I can’t wait to see how that’s explored as we move forward.

Speaking of the narrative in an episode, the story of “Scientists Hollow Fortune” features, finally, the guest appearance of Gaius Charles (Aquarius,Â Friday Night Lights). Charles is a fantastic actor, and it’s always great to get him on a show like this. His character is a former soldier that serves as the subject of the “case,” so we get plenty of him throughout the hour. Charles does a wonderful job as the confused man, bringing a wide range of emotion to one of the show’s most interesting guest characters in a while.Â Blindspot‘s main cast is always fun to watch, but the show benefits greatly when it uses these guest stars in strong ways (as it does here). There’s one scene in particular that shows the character interacting with his mother, and it’s very powerful to watch.

The action in “Scientists Hollow Fortune” was solid, but it didn’t really stand out from what we typically see onÂ Blindspot. That’s not a bad thing exactly, but the strength of the guest cast would have been highlighted even more if the rest of the show had lifted itself to that level. With that said, there was one sequence later on in the episode between Jaimie Alexander and Gaius Charles that was very well-choreographed.

One thing that I did like a lot about the episode was the exploration of the relationship between Kurt’s sister and his co-worker. David and Patterson were two of my favorite things about the first half of the season, and I’m interested in seeing if this relationship can fill some of that void. I’m not nearly as invested in them as I was the previous couple (Patterson is justÂ too likable), but there’s definitely some potential here.

“Scientists Hollow Fortune” was nothing special, but it was still a fun episode ofÂ Blindspot. It didn’t progress the story as much as I hoped it would after the pacing that was established last week, but it still did enough to keep you engaged and wanting more. The case-of-the-week was pretty generic, but it was elevated a bit through the addition of Gaius Charles. Overall, “Scientists Hollow Fortune” was exactly what I’ve come to expect from an episode ofÂ Blindspot.

“Scientists Hollow Fortune” was a very average episode of Blindspot that was elevated slightly through the addition of Gaius Charles to the guest cast.