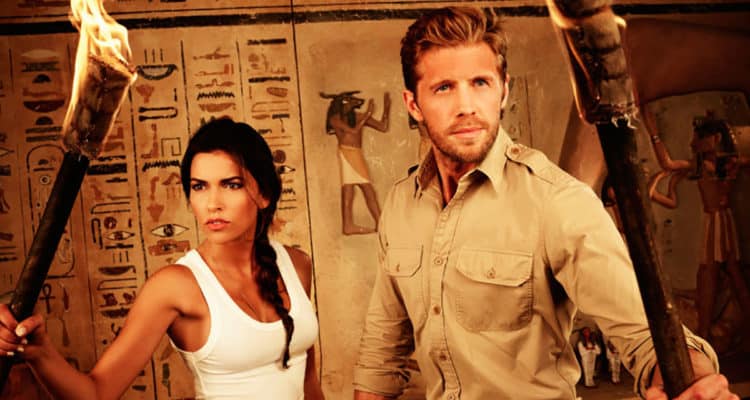 Blood & Treasure is a new show that has started up on CBS. Currently, it is expected to run for a single season consisting of thirteen episodes. However, time will tell whether it is capable of securing further seasons or not. Here are 10 things that you may or may not have known about Blood & Treasure:

1. It Doesn’t Hide Its Sources of Inspiration

There are some shows that are embarrassed about their sources of inspiration. However, Blood & Treasure isn’t one of them. Instead, the show is perfectly open about the media that inspired it, as shown by how one of its characters outright states that they are an Indiana Jones fan. Besides that, other sources of inspiration for Blood & Treasure range from The Da Vinci Code to National Treasure. Based on this, interested individuals should have a pretty decent idea of what they can expect from Blood & Treasure.

2. Plays with Gender Expectations a Bit

For the most part, Blood & Treasure is pretty conventional. However, it is interesting to note that it plays with gender expectations a bit when it comes to its two main characters – an antiquities expert named Danny McNamara and an antiquities thief named Lexi Vaziri. Generally speaking, this kind of media has the male lead providing the brute force solutions to various problems while the female lead serves as the source of information on relevant topic. Here, the setup is reversed to an extent.

3. The Plot Kicks Off with a Kidnapping

The plot of Blood & Treasure kicks off with a kidnapping. To be exact, a terrorist named Karim Farouk kidnaps an antiquities expert named Dr. Ana Castillo, who happens to be Danny McNamara’s mentor. As a result, Danny McNamara seeks out Lexi Vaziri for help, both because she has criminal contacts and because the two have a previous connection with one another. The plot for Blood & Treasure promises that the two will be both helped and hindered by a number of other characters that they will encounter while their efforts lead them into something much bigger than what either one of them might have expected.

4. The First Two Episodes Focus On a Real Location

For those who are curious, the first two episodes are called “The Curse of Cleopatra,” which makes sense because the Tomb of Anthony and Cleopatra play such a big role in them. In short, said tomb is a real location that has been lost for centuries and centuries. However, there are people who believe that its general location has been found, though it remains to be seen whether their ongoing efforts will actually uncover what they are looking for at the suspected site in Taposiris Magna.

The “Anthony” in the Tomb of Anthony and Cleopatra refers to Mark Anthony, which would be the Anglicized form of Marcus Antonius. In short, he was one of Julius Caesar’s chief supporters. As a result, when Caesar was murdered, Anthony became one of the main leaders of the Caesarians. When the Second Triumvirate divided up the Roman Empire into three separate spheres of influence, Anthony took the rich East while leaving problem-plagued Rome for Caesar’s adopted son Octavian. Something that brought him into contact with the Egyptian queen Cleopatra VII Philopator.

Generally speaking, when people refer to Cleopatra, they are referring to the famous Cleopatra. However, it is important to note that the Ptolemies were not particularly innovative when it comes to naming their children, which is why the famous Cleopatra was Cleopatra VII Philopator while the full name of her son by Caesar was Ptolemy XV Philopator Philometor Caesar. Both Philopator and Philometor were common epithets for Hellenic monarchs that meant “Father-Loving” and “Mother-Loving” respectively, which some people see in a rather ironic light because of the vicious political struggles that were common in said dynasties.

7. Anthony and Cleopatra Can Be Considered One of the Great Love Stories of the Ancient World

In any case, Anthony and Cleopatra are pretty well-known to say the least. However, different people have viewed their love story in a wide range of different ways over the course of centuries. For example, the ancient Romans regarded it as a corruption of the Roman Anthony by the foreign Cleopatra, not least because Octavian found it useful to depict his final confrontation with Anthony for supreme power as a foreign war rather than a civil war. However, modern audiences tend to see the whole thing in a much more romantic light, both because we are suckers for anything that looks like a love story and because Cleopatra is one of those very rare individuals who have managed to remain fascinating long after their death.

8. There Is No Great Mystery to How the Tomb of Anthony and Cleopatra Was Lost

There is no great mystery to how the Tomb of Anthony and Cleopatra was lost because time can erode a great deal of things. In fact, there are much more famous sites in Egypt that have become lost to history, with an excellent example being the Tomb of Alexander that was once one of the leading tourist sites of the ancient world. Nowadays, there are a host of theories about what happened to the tomb. Some examples are pretty far-fetched, with an excellent example being the one about Venetian merchants smuggling out the remains in the belief that they belonged to St. Mark the Evangelist. Other examples are much more plausible, though time will tell whether they are true or not.

9. The Title of the Third Episode Refers to the Hawala System

The third episode is called “Code of the Hawaladar.” Chances are good that most viewers will have no clue what a hawaldar is supposed to be. If so, interested individuals should know that hawaldars are essentially the network of money brokers who make the value transfer system called hawala possible. The whole system operates on honor, which makes it difficult to regulate by the authorities. However, that same characteristic makes it possible to function in the absence of legal oversight, which is critical because said system came into existence in a time when states were much, much weaker than in the present time.

10. Very Much a Summer Show

On a final note, it should be mentioned that Blood & Treasure is very much a summer show. Perhaps unsurprisingly, some reviewers see it as a fun and fast-paced show to waste some time on, whereas others see it as a hollow aping of its sources of inspiration with none of the spark that made those special. For the time being, it remains unclear how the viewers will react to the show as a whole.