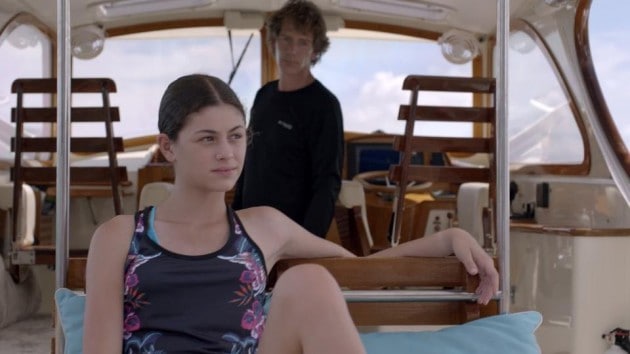 On the heels of the game-changers that were setÂ into motion in the previous episode, “Part 11” of BloodlineÂ begins with the forever emotionally bankrupt Danny sitting at a bar. He has burned bridges, he smells danger, and he has crossed his family; if I had to guess I would say he is regrouping, yet one can never know with him. The character is as unpredictable as he is dangerous.Â  A man heads towards him and gives him a cell phone. He introduces himself as the new intermediary between Danny and Wayne Lowry, but doesn’t give the eldest Rayburn a name. Danny, who is not a pushover, says that he wants to talk to Rafi, to which Wayne’s partner responds that the man is gone. Danny reads between the lines, and, later on, talks to Eric, who also puts two and two together and arrives at the conclusion that no one will ever see Rafi again. He also understands that they are in an hazardous situation. Things have gotten out of hand. Regardless, Eric pleads his loyalty to his friend. O’Bannon is a crook, but one with principles.

Later that night, Kevin, who has also gotten better at connecting dots, asks Danny if he was behind his assault, and on top of that, he points fingers at Eric as the possible assailant. Danny does not refute his brother’s accusations and, in turn, decides to get a high out of the sibling rivalry, saying that if he was the brains behind “Operation Beat Kevin Up,” he is sorry. For more bite, he adds that apologies have never helped him. He claims that he has been apologizing his entire life, with no success. Although Danny is right, his arrogance destroys his own argument. It is hard to feel empathy towards the black sheep of the family.

In the meantime, Carlos is caught off guard by John when he is on his way to an AA meeting. The sheriff demands Danny’s lackey to get in his vehicle and calls him out on his lies and his ties to the eldest Rayburn’s shenanigans. Trapped again by yet another member of the Rayburns, Carlos leads John to the shed and the drugs. He tries to explain that he had no choice but to follow Danny’s orders because he was being blackmailed, but John shows no mercy and tells him to leave permanently or else.

Now that he has gathered most of the pieces of the puzzle, John summons Meg and Kevin and lets them know that they are at a crossroads because of Danny. The bottom line is that whatever the siblings decide to do will be dangerous and mostly illegal. If they report the drugs on the inn’s premises, the place would be shut down and the whole family would be under investigation, their name tarnished and their mother crushed. However, if they get rid of the cocaine, they would become criminals. Seeing the three plotting when they know there is no chance of a happy ending is a tough pill to swallow; however, Bloodline excels at bringing its characters to their knees. In addition,Â the acting was perfectly measured on every account.

After meeting with Meg and Kevin, John talks to Clay, the lead agent on the case, and comes clean about Danny being the unknown male associate of Lowry’s that they had heard on the phone conversation recording. Then he admits some of the things he knows about his brother’s involvement. The DEA agent seems to believe John and tells him what heÂ already knows: the whole family will face the music and undergo an investigation. Following John’s admission, he is taken off the case, while DEA agents take Danny to the police station and the shed is raided. Conveniently, the cocaine is nowhere to be found. Since there are no drugs, Danny is released.

Meg is called to be questioned, and she claims that she saw the drugs on the property and called her brother. She remarks that there is nothing else she can contribute. While this is happening, Kevin loads the drugs onto a boat, and and while doing so, he finds the unmarked gun that we had seen him giving to John in Bloodline‘s earlier flash forward sequences.

After calling Kevin to let him know that their plan seems to be working, John stops by the shed where Danny asks him what he did with the cocaine. The eldest Rayburn also admits that he is in hot water with Lowry, to which the sheriff suggests he should go away. He then offers him a ride to the bus station, but before they leave, the two brothers have another altercation regarding Sarah’s accident.Â  The sequence is powerful, emotional, and necessary. It’s yet another proverbial nail in the coffin. What broke with their sister’s death could never be fixed.

At the boatyard, Meg and Kevin wait for John, who decides to literally take matter into his own hands and disposes of the cocaine on his own. In parallel, Lowry and his new Rafi are waiting for Danny to show up. They give him an extra hour, but if he doesn’t appear, Wayne wants his new associate to do whatever he needs to do, which later on translates into Eric being beaten up for information regarding Danny’s whereabouts.

Sally, Meg, and Diana go dress shopping for Meg’s wedding, though she is not sure that the event is still taking place. The women are waiting for John to drop Jane off, and when Diana calls her husband to ask about his ETA, he rushes to get the girl. To the sheriff’s surprise,Â Danny has already picked up the teenager, a chilling realization for both the character and the audience. Danny couldn’t have come back just to randomly bond with his niece. He has an agenda.

Danny has taken an unaware Jane on a boat ride. Both of them seem to have fun, as they talk and play in the water. Nothing dark seems to be taking place on the boat until Danny’s flashbacks are sparked. He remembers the accident and how Sarah dropped her seahorse necklace. As it turns out, she was trying to reach the item when her arm became stuck on some coral. As a result, SarahÂ drowned. The images haunt Danny. It was an accident, after all, yet everything that has taken place since he got back to the Keys has not been. His actions unleashed a wave of consequences.

John and Marco get on a boat to try to find Danny’s but they fail. Once they are left with no places to look, John gets a call. Danny’s boat has been located and Danny was seen in it, but not Jane.Â  Fearing the worst, John goes home, and while he searches for his daughter there, Danny calls him. John asks him what he wants and what he did with Jane, who he suddenly spots on his back porch, in one piece and wearing the seahorse necklace.

Lately, I keep saying “this is the best episode of Bloodline yet,” which, naturally, is a good thing. “Part 10,” which was so poignant, was a tough act to follow, but “Part 11” was, somehow, even better. Every note was hit, the storylines kept moving and morphing beautifully, and tension has risen to unbelievable levels. The cat and mouse dynamic is exploited with proficiency both by writers that know exactly what they are doing and by actors who are armed with talent.

– Danny leaving his good friend Eric a voicemail from the bus to let him know that he is leaving and to ask him to say goodbye to Chelsea was a very nice touch. It adds layers and emotions to a character that, on occasion, seems dead inside. In addition, his hallucination with Sarah is in the perfect tonal key. It rings genuine and, once again, proves that Danny knows he will go down in flames–he just wants his revenge.

– Just as random brushstrokes in a painting, a few of Bloodline‘s smaller arcs get a little bit more of attention in this episode, as Belle tells Kevin that she might be relocating and Marco lets John know that he is aware that he is protecting his family, but that the case deserves to be solved as well. There are more families beyond the Rayburns.Â  Both Belle and Marco are secondary characters that do deserve more focus, but I will take whatever we can get.