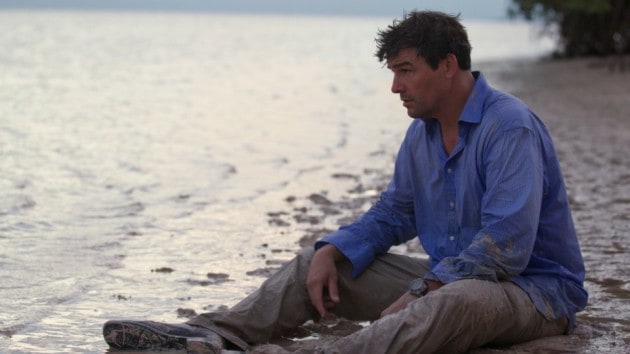 The penultimate episode of Bloodline‘s first season opens with John going all Sheriff Rayburn on his own daughter, after the teenager disregarded his and Diana’s orders not to spend time with Danny. Jane doesn’t see why a boat trip with her uncle is such a big deal, which makes sense since sheÂ has never been given substantiated arguments about why Danny is a menace and doesn’t perceive him as such. Diana, meanwhile is filled with anger and resentment towards her husband, whom she blames for everything that has been transpiring. Additionally, she is not happy with his request for her to take the kids and leave town for a while. Diana is convinced that John’s enabling has gone too far and is what has put them in the situation they are, an assumption that is not entirely baseless.

In the meantime, Meg deals with issues unrelated to Danny and talks to Marco, who, in few words, tells her to move on, go to New York, and do whatever she wants to do. He has put himself out of the equation, which is the smartest thing to do; they would have crashed and burned eventually. Though I feel for Marco, he deserves better, and Meg has proven to be toxic for him.

Speaking about the her, later on,Â  without having done much mourning over her failed relationship, Meg looks at flights to NYC when she gets a visit from Danny. She immediately asks for him to leave, but he doesn’t. He is the Boogeyman; he never leaves. Instead, Danny asks if she had any part in the Rayburn raid of his shed and the disposal of the drugs and if she filed the paperwork to cut him back into the will. She replies in the negative on both accounts. The exchange between the two is thoroughly enjoyable given how charged the environment is between the siblings; however, there is a sense of unresolved tension that envelopes them. There are too many things left unsaid, which works well. At times, Meg and Danny look like they are strangers to one another, an element that has played out quite nicely.

In the meantime, John visits Sally, and he finally spells the truth out. He lets his mother know that his brother, her son, is dangerous and in trouble with the law. Therefore, she needs to let him know if the black sheep of the family shows up at the premises. Sally says that she trusts John and seems to agree with his plea.Â  In parallel, Danny hides in a hotel room that his pal Eric got for him and calls John to let him know that he might tell Wayne Lowry how the coke vanished and who had a hand in it. There is no need to explain that, by dropping John’s name, imminent danger would be upon him and his family.

The next day, Danny meets Lowry at the bait shop and lets him know that John took the merchandise; he also adds that he can get it back since he has a way with his brother. Moreover, Danny attempts to relieve some of his boss’s concerns by revealing that John is actually interested in the human trafficking case. Lowry doesn’t bite and asks him to leave; then he talks to Ralph, his new enforcer, to let him know what Danny just told him. Lowry is clear that his intentions are to try to recover the cocaine.

Later on, Chelsea is next in Danny’s list of “people to visit”. The woman, who has been nothing but loyal, is hurt because she believed he had left without a word. She knows he is in trouble, yet she doesn’t give him the cold shoulder like everyone else has, which could be the human thing to do, or the dumbest. Instead, she lets Danny borrow her car. In parallel, the other O’Bannon is assaulted at his sister’s house by Ralph. When Chelsea gets there, Eric looks in bad shape and tells her that he is going away and that she should too.

Kevin, who had been driving around town, looking for Danny and holding on to the unmarked gun, finally spots his older brother filling Chelsea’s car with gas. He asks John what to do and the answer is to keep him there while John is on his way. Danny soon sees Kevin and approaches the car only to say mean things to him. Danny knows how to push his brother’s buttons and does exactly that, until Kev shows him the gun and asks him to get in the car. Danny barely reacts to a threat he knows to be empty; instead, he says some more hurtful words and walks away.

In a surprising turn of events, Chelsea shows up at John’s office; she tells him that Eric was roughed up by one of Lowry’s men and shows genuine concern towards Danny’s life. Moreover, ChelseaÂ informs John that his brother is hiding at the hotel and asks that he helps him. The scene is powerful, albeit short. Sevigny nails it.

After talking to Chelsea, John makes his way to his brother’s hiding spot and calls him from his car. John stays parked outside the hotel and offers to meet Danny so they can try to find a solution to the mess heÂ has gotten himself into in exchange of the eldest Rayburn ensuringÂ that the whole family will not be in harm’s way. They agree upon gathering the next day while John spots Ralph lurking outside the hotel. He loses the subject but hears gunshots and decides to drive away. Naturally, over the police radio, he hears that something happened at the hotel, and Marco is on his way. John keeps driving.

Kevin, Meg, and Sally assemble at the inn’s kitchen when John joins them and assures them that he talked to Danny and everything will be okay. Subsequently, he heads to the bathroom to throw up, an action that may indicate a visceral response to what has been transpiring, or a tell tale that his health has deteriorated as a product of the stress and the drama. When John makes his way back to the kitchen, Danny is there. Tension can be cut with a butcher’s knife. On her part, Mama Ray attempts to have some sort of family rehab session, yet Danny comes forward about his the cocaine and casually admits that now everyone is in danger. Sally inquires further and is told that the drugs were stored at the inn. Her disappointment is palpable, but Danny doesn’t apologize. On the contrary, he blames everyone for the terrible existence he has had, calls them liars (which, in all fairness, they are), and tells Sally that she is the worst of them all since she always took Robert’s side and never protected him. Sally is shattered; however, she delivers one of my favorite lines yet fromÂ Bloodline, one that is probably the most honest thing she has said on the show: she tellsÂ Danny that he has finally lived up to Robert’s expectations, and he leaves right after hearing that.

Once Danny has vacated the premises, Sally goes to her room and asks to be left alone, leaving her other three children together in the kitchen. The interaction between them is delectable for it is mixed with anxiety, questions, and choices to make. However, John calls the shots once again, claiming that he will handle DannyÂ and instructs a volatile Kevin to stay at the inn with Meg, who he assumed was going to play perfect daughter. It is interesting to see how they all fall into their dynamics: John is the boss, Kev the wreck, and Meg plays house.

In spite of John’s orders, Kevin heads to his office at the marina, where he continues to drink and snorts cocaine, while he plays with the gun. He then calls John, who is at the crime scene with Marco, and tells the sheriff that if he doesn’t do something, he will. John meets him at the marina and takes the gun. Suddenly, the present catches up with the flash-forwards.

In the meantime, Danny is listening to the recordings of his family members’ testimonies regarding his injuries; he knows them by heart, which is unsettling but not out of character. This is, after all, a character that has been plague by the past his entire life, and instead of letting go, however complex that might be, he has chosen to feed his anger and anguish. Danny has both self-flagellated and inflated everything that was ever wrong.

The arranged time for John and Danny’s meet comes, and they both arrive at the beach. While John asks his brother how they can fix things, showing that he still hasn’t given up, Danny bites back by revealing that he was the one who told Chelsea to see the sheriff and tell him about the hotel. He also says that he knows that his bother was there and didn’t stop Ralph. In turn, and attempting to say what Danny wants to hear, John claims that he regrets not defending him in the past, but Danny tries to manipulate him and responds that John feels guilty about Sarah’s death, which the sheriff denies.

The blame game escalates, supported by A-class performances, until Danny finally admits that he wants John to experience what it feels like to be begging for things all his life. He even dares him to beg him to leave. John, instead, makes a case by saying things need to end and proceeds to hit his brother, who just laughs. Danny turns into The Joker and shows little to no resistance as John lets his anger come out in a violent rage. They wrestle in the water until John literally has the upper hand and drowns Danny.Â The episode ends with John sitting on the sand, staring at the lifeless body of his brother in the water.

“Part 12” was a satisfying episode of BloodlineÂ that both opened up the show to more conflict, while there was also some closure. Loose ends are being tied, and people’s true colors have been revealed. Now, given that Danny is dead, more choices are in store and a shift in Bloodline‘s dynamicÂ seems imminent.

– Marco questioning John was necessary. He might have been blind regarding Meg’s cheating, but he is not when it comes to his job.Marco is a fine detective who is able to leave his job at the office, even if that backfires on him. I will say it again: Marco has been an asset to the show.

– Sally finally reads Danny’s speech and even though the audience doesn’t get to know his every word, it doesn’t seem necessary. The element was well-played.