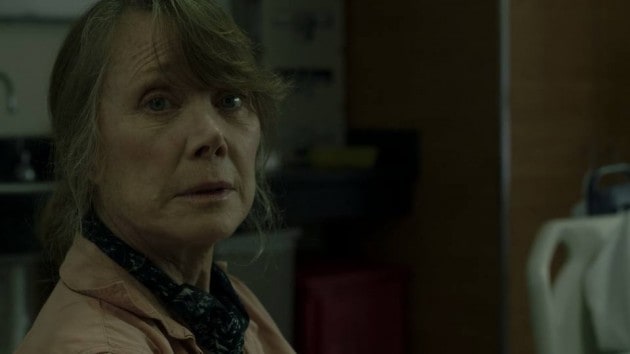 Sometimes the simplest answer is the right one, except for the Rayburns, for whom nothing is ever straightforward. Danny might be a pot stirrer and the initiator of many debacles; however, his return is making skeletons stored in Bloodline‘s characters’ closets start to form a line and take part in a dramatic parade of epic proportions.

When Papa Rayburn seems to have a kayaking accident and the family learns that it was none other than Danny (who they presumed had left town) who brought the patriarch to the E.R., suspicion arises. In spite of doctors pointing at a possible stroke as the cause of Robert’s unfortunate incident, Kevin instantly disregards the diagnosis and accuses his older brother as the culprit. In turn, Meg cannot fathom the thought of that scenario. As much as she admits that Danny is not good news, she is unable to believe that he would try to hurt their father. John is the most cautious of them all, and as the good sheriff he is, he takes the time to examine the facts; as a result, he is not sold on any hypothesis. Whatever the case, the mere fact that the idea of Danny hurting their dad is even on the table is disturbing to say the least.

I believe that one of the elements that Bloodline uses strategically is the unreliability of what may or may not be the actual facts. As a result, the storyline is not as much about what happened but what that detonates. Much like in Doubt and Rectify, suspicion alone will make people react in different ways, and the cause and effect algorithm is going to have multiple combinations. There is a parallel domino effect going on that, at times, intersects, which, in my opinion, is fascinating.

While Robert Rayburn is unconscious, the field is open for the blame game to fully develop; as a consequence, both the past and the present provide validation for different theories and even behaviors. For instance, Danny, who has hurt his shoulder, according to him, whilst rescuing his father from drowning, is told by the doctor that he needs surgery. He didn’t just injure it; he had suffered trauma there before, and getting his dad out of the water only made it worse. He says that a car accident is the cause of his old wound; however, through a series of flashbacks, a darker truth is unveiled: there was no car–his injury was caused by another person, and the perpetrator is now lying in a hospital bed due to head trauma. Naturally, this new information generates new questions and adds some more depth to both Danny and Robert’s characters.

Both Sally and John remember and reflect on how Danny actually had his arm fractured. However, what really happened is not out in the open; the narrative is fragmented and plants the seed for more storylines to grow. Until this point, everything bad was associated with Danny, but now Robert could be the root of much of his son’s darkness. Another question that lingers is how in the dark are Meg and Kevin regarding their father’s beating of Danny. Context is resignifying everything previously known and assumed.

Since lies, omissions, and hidden truths are the corner stone of the show, John telling Danny that their father is not ready to have him back propels a conflict to be born. The lie is the engine that causes the characters to move in different directions. To begin with, DannyÂ confrontsÂ his dad because of what he thought to be truth, only to discover that it was his siblings who shut him out. His misplaced anger, then turns into something else that is brewing, since he chooses not to confront Meg, Kevin, and John. On the other hand, Sally, who does not know who made the call, asks John to bring DannyÂ back. Kevin, who is privy to the fact that John had his dad take the fault, is livid, and he also takes that as Danny’s motive for tying to hurt Robert.

John is the glue trying to hold the family together, while at the same time, he is still investigating the crime of the girl found in the swamp. In parallel, he is trying to get to the bottom of things and make sure that his father had an accident. He questions his older brother. Danny simply responds that he didn’t leave and that he was trying to talk to his father, to say goodbye and to avoid bad blood. He does sound truthful; the problem is that no one takes his word seriously. Also, John did drop him off at the bus stop, so Danny squeaking back is fishy.

As the viewers begin to understand why, in part, Danny is so damaged, the way the flashbacks are sprinkled and the small reveals are displayed throughout the hour function as a well-lied storytelling machine. Now it is fully clear that Robert is not the picture perfect father, while Kevin’s life is unraveling due to his temper. Even his marriage is on the rocks. The men of the Rayburn family are explored in a fascinating way throughout the episode; in contrast, the women are relegated to offer support, which, as solid as it is, reads a little bit as underdevelopment, especially in Meg’s case.

Both for a follow-up to an outstanding pilot, and as a standalone episode, “Part 2” succeeds by continuing to strongly define Bloodline‘s characters and providing viewers with more intriguing questions than they had before.

– ChloÃ« Sevigny, playing Chelsea, Eric’s sister, shines in her small, yet captivating performance. She is also a good human device to move the plot and offer more context. On the other hand, she seems to be the only person in the world who does not believe John is a God. She is more partial to Danny, to whom she is, in fact, kind without asking for anything in return.

– Sissy Spacek is able to break hearts with just one look. Sally’s reaction after remembering young Danny’s visit to the hospital is devastating. At the same time, it is easier to see why she acted so protective of him.