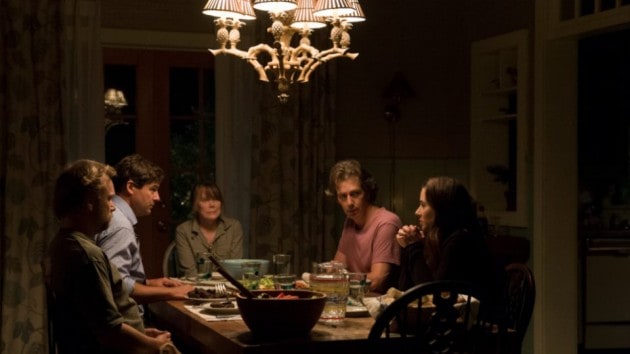 The third chapter of Netflix’s Bloodline opens with a flash-forward sequence. Meg is rushing in into her home in the dark, drenched, visibly shaken, and trembling. She reaches for alcohol to try to steady her nerves. Then the life is scared out of her when she gets a call from Danny’s phone. All the while, we hear John’s voiceover, in a few words, claiming how good of a person she is. He points out that she takes care of people, and tries to make everyone happy. That is what leads to her demise, he pronounces. It’s a powerful preface for an unsettling episode, one that finally delves into the youngest Rayburn life.

As more hints of what makes Danny the target of such charged animosity are sprinkled into the story, it becomes clearer that the past wounds that he is probably the perpetrator of are related to yet another Rayburn: Sarah, whose cause of death is not yet known. What this installment does clarify is that the girl was Robert’s favorite. As it appears, Meg was not always the princess. This detail, along with the name choice for the female characters, is very Luisa May Alcott of the creators.

As was revealed in “Part 2,” Meg had been requested by her father to amend his will and leave Danny out of it. Robert’s accident has made guilt hit the lawyer; therefore, she decides to follow her father’s wishes, although the new document is not valid since he is not fully aware of everything that is going on. Robert calling Meg “Sarah” was a smart move on behalf of the writers, since it proved he is not entirely competent as a cause of his memory loss, while the drop of the name has an impact on his daughter, who, as is revealed, is trying really hard to fill the space her sister left.

Just as Danny is a sour subject for the clan, Sarah evokes a distinctive sadness in the members of the family, a concept that is reinforced when John’s son, Ben, finds a family video of one of Meg’s birthday parties, where Sarah is present, and the second oldest Rayburn tells his son to avoid adding the footage to the video he is editing for Robert, since the old man does not need to see it.

The main conflict of this episode of Bloodline hinges on Meg’s conundrum regarding keeping or leaving her brother in the will. She is, as Marco states, put in an impossible situation, which leads me to Robert, who, first, told John the siblings should decide whether to keep Danny around or not, and now, we learn, has asked his daughter to do something that would naturally pit her against her brother. The man seems to either love mind games or be completely unaware of his children’s feelings.

While Meg tries to decide what is the right course of action, even asking Kevin for advice, Danny tries to prove everyone wrong and helps with the inn, yet it does not take him long to ask to be put on the payroll and even complain about his salary. He does an excellent job at being recalcitrant even when trying to show he is not the villain everyone believes him to be. In fact, his moral compass is so broken that he takes Meg’s questions about his plans for the future as a personal attack and makes her his target. He knew his father wished to disown him and has put two and two together.

“Part 3” does an outstanding job at reminding us about the problems the Rayburn siblings have in their personal lives. Danny keeps reminding everyone why he is the black sheep, while John continues to be stressed out, which is why he has some health issues. Kevin’s marriage has come to an end, and Meg is being unfaithful. For some reason, however, everyone is fixated on the drama of Danny going back to live with their parents, which makes the family dinner a delicious scene to watch, amidst a dense awkwardness.

At the end of the aforementioned shared meal, Kevin asks Meg to join him for a drink, because he needs to share something with her. She agrees, even though that means she has to cancel her cheat-date with Alec, whom she calls, unaware that Danny is listening to part of the conversation. Because he is simply broken inside, the eldest Rayburn decides to get more dirt on his little sister, who, he believes, is trying to take him off the will. He, as a result, gets some information from Chelsea, and later on, while at the hospital, he goes through Meg’s purse and keeps her motel card in his possession.

Just as Meg and Marco are discussing if there should be an “us,” Danny decides to pay a visit to the sister who is actually trying to make him feel part of the family, and he proceeds to be as vicious as possible with her, first by threatening to expose Meg’s affair unless she keeps his name on Robert’s will, and then by reminding her that she will never be Sarah, which is a punch below the belt. His cruelness is gratuitous given that the motel card alone grants him what he wants. Making a point by clarifying that Meg will never be their father’s favorite was just for sheer emotional overkill. It is clear by now that Danny’s intentions are not to fix the damage his family exhibits; he is just trying to break them all, quite possibly one by one.

To bookend the episode, another flash forward accompanied by John’s voiceover follows Meg holding her phone, running out of her house and opening her car’s trunk, where Danny’s body lays. Additionally, John’s words try to justify Meg’s actions, which added to the unregistered gun and the boat in flames, indicate that the Rayburns are going to have a lot of explaining to do down the line.

“Part 3” is the perfect amalgam of an episode. It explores some before teased elements, such as Meg’s tryst with her client, while more information emerges and context gets layered. The fact that the more information is displayed, the more questions result, is a testament of the riveting writing the viewers are being treated to. Bloodline, much like Damages did, invites the audience to be involved with the story as it unfolds, to be invested in characters that are as flawed as they are interesting. However, the warrant was given at the beginning: there will be suffering, and there will be blood.

– Linda Cardellini carries the episode masterfully with her layered performance. Every powerful feeling in existence inhabits her in “Part 3,” and she delivers every single time. Her range comes as no surprise and is a reminder of why she has been cast to be part of such gifted ensemble.

– Steven Pasquale’s Alec is the man we want to hate for sleeping with Meg, yet he does listen to her, asks about her father’s health, and, his “other man” status aside, seems to be a perfect gentleman. As I said, we want to hate him; however, we can’t, which is quite extraordinary, albeit troubling.