Alex is still trying to chaperone Radon, who has his eye on Mary Jo, who’s still attached to Alex. Meanwhile, Coach Daniels’ angry ex-wife (played delightfully by Richards) thinks it’s a good idea to rehabilitate the team’s image by scheduling a charity game between BMS and a local church team. Of course, our heroes would rather be drinking, except for Radon, who tells a story about how he burned down his neighbor’s house when he was ten. I swear, he’s a closet psychopath.

Much to Alex’s horror, Radon sets up a date with Mary Jo, and when Alex tries to put a stop to it, she assumes that he’s jealous. Then again, she might be just as crazy as Radon. The two of them probably deserve each other, and if they managed to somehow self-destruct together, Alex’s life would be a lot easier. Then again, if that happened, we wouldn’t be treated to Darin Brooks’ excellent expressions of complete horror. Half the fun of watching this show is watching his reactions to everyone else’s insane behavior.

That night, Thad has an epiphany in which he sees former NFL player Brian Bosworth, who tells him that he’s going to be a top-three pick in the 2011 draft if he can become celibate for the rest of the season. In a subsequently holier-than-thou mood, he proceeds to spread his wisdom to everyone else, even if they don’t ask for it. (Alan Ritchson proves that yelling completely random things at total strangers is funnier than you think.) Once Coach Daniels hears about Thad’s vision, he assumes that’s the reason for his improved on-field performance, and makes it a mandate for the entire team. This does not sit well at all with an on the prowl Mary Jo, who does everything she can to derail them. Did I mention that she frightens me?

The new “lifestyle choice” takes its toll on the team, and by game day, they’re all a little bit crazy. Looking at scantily clad cheerleaders doesn’t help them either. They’re running over the opposition, which makes Coach Daniels’ ex-wife very unhappy. After some prodding from Sammy, the coach finally tells her how he really feels. He throws Alex into the game, because Radon is off trying to pounce on Mary Jo in the portable restroom – at least until it gets knocked over during the final play of the game. The scariest part of this whole affair isn’t how badly it goes for Radon, but that Alex admits he actually wants to sleep with the crazy woman. I’ll blame it on the delirium.

At yet another party (there’s no shortage of them at BMS), Mary Jo confronts Alex about her failed encounter with Radon, and Thad is clinging to his celibacy even if it means he passes out drunk. I’m fairly sure that means horrible things are going to happen to him, no matter what Brian Bosworth tells him.

The more I watch this show, the more it grows on me. In my college career, I never experienced anything like this, nor did I know anyone remotely like the characters. I’ve come to realize that’s a very good thing. This is a purely uninhibited half-hour that does not require thought, just a willingness to laugh at situations you can’t even fathom. The show is armed with a cast that’s in on the absurdity and willing to laugh at themselves right along with us. In that sense it’s universal: the characters are just out to have fun. So, too, are the actors and in turn, so are we. I just wish I knew someone like Alex Moran, because I find him strangely endearing…and I think he needs a good slap upside the head.

Next week, the feud between Thad and Radon comes to a head. If it’s anything like Radon’s disagreement with Alex, this ought to be interesting. Until then, I’m off to practice my quarterback sneak. 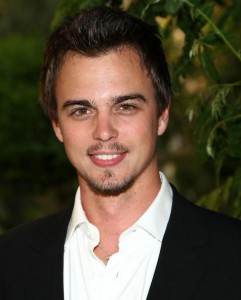 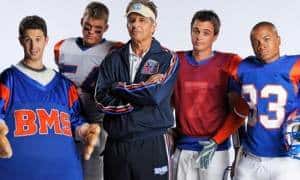