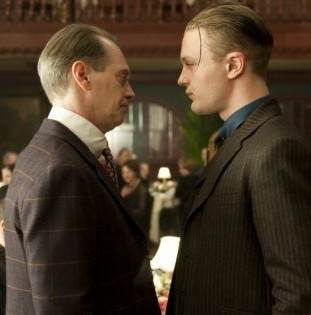 There are those who would bemoan the idea that Boardwalk Empire pours itself at a slow pace. Well, to them I say…you’re absolutely right. However, like a smooth whiskey cascading down the ice, ‘A Dangerous Maid’will keep whetting your anticipation.

Poor Lucy Danziger (Paz de la Huerta) feels increasingly like a punching bag for Boardwalk Empire, particularly when paired with the transcendentally condesecending Nelson Van Alden (Michael Shannon), but in spite of her despair ‘A Dangerous Maid’finally gives Lucy a chance to shine.

Most of ‘A Dangerous Maid’sees the Boardwalk Empire players yearning for something in the distance just beyond their reach, whether its Lucy longing for the music across the alley, Margaret, Richard and Al Capone all longing for family relations they’ll never have, or Nucky trying to claw his way out of a deepening grave. The only real action comes when our favorite treasurer finally snaps at the Commodore for eating the last lobster at his favorite restaurant, and boldly declared his intentions to ruin Jimmy, his father and the Governor should they keep plotting their political coup. They’re small concessions, but Nucky, Lucy, and Margaret alike all manage to find small measures of solace from their troubles.

While ‘A Dangerous Maid’certainly allows us to sympathize with Lucy (despite the drinking, smoking, and nearly throwing herself down the stairs to end her pregnancy), it’s Van Alden who grows increasingly fascinating, now apparently so involved as to be on the take from alcohol bootlegging. Doyle himself puts it best by being unable to get a bead on the wayward prohibition agent, but whatever direction Van Alden takes as the season continues, Michael Shannon will undoubtedly nail the dramatic range.

It should also be said that there exists a certain blissful ignorance in being unfamiliar with real-world history and its ties to Boardwalk Empire. I confess to not being terribly familiar with the ultimate fates of the real-life Arnold Rothstein or Lucky Luciano, but the masterful tension seething between Michael Stuhlbarg and Vincent Piazza over the card game murders of last week’s ‘Ourselves, Alone’keeps us riveted for the bloody mess undoubtedly coming.

There’s no dramatic upsets or significant action (or Chalky White, for that matter) to be found in ‘A Dangerous Maid,’with only the slightest movement in Jimmy’s allegiance to the Commodore, but some cigars are best with a slow burn. And like Lucy, Nucky, Margaret, Jimmy, Richard, Al and Lucky, we’ll all keep yearning for what’s just down the way.