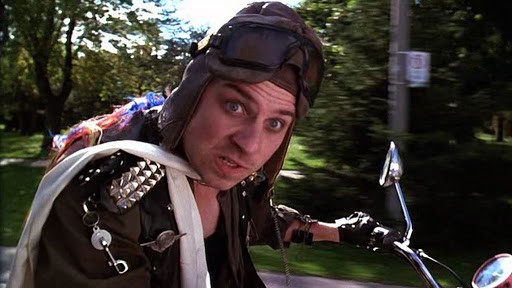 When it comes to being funny, Bobcat Goldthwait has never had that much of a problem with getting people to laugh. The guy has been a comedic mainstay for a while now and despite the fact that he gave up one of his funniest characters ever in Zedd from Police Academy he’s still hilarious since his sense of humor is on point and one can’t help but laugh at the stories he can tell. The one that he retells on the World’s Best Dad podcast about setting fire to the couch on The Tonight Show is one of the funnier moments of this interview but throughout the whole thing it’s pretty obvious that the three men are just having a good time and sharing memories of Bobcat’s that he finds fairly interesting and worth telling. There’s not a lot of talk about Zedd to be certain, if there’s any, since again, that’s a character that the comedian left behind. Shakes the clown however is someone that he’s more than willing to talk about, especially since famed director Martin Scorsese happened to like the character apparently. For decades now Bobcat has been one of the funnier comedians out there, though a lot of people have allowed him to move to the back of the bus so to speak as his level of comedy was bound up in Police Academy for quite some time.

On this podcast however he fits in perfectly since the two hosts are fun-loving individuals that take on various subjects and usually find a way to relate it to being a dad that’s simply trying to do the best in the world and take care of their families as only a father might know how while at the same time being big kids that still know how to have fun and be the kind of engaging parent that’s not too stodgy or uptight. That’s what a lot of fathers would love to think of themselves once they get older and start seeing life through a different set of lenses since when you’re younger and don’t know as much a lot of fathers feel a bit lost and try to at least act like they know what they’re doing. It takes a person with enough experience and wisdom to admit that no matter how old we get we’re usually just winging it since life takes hold of our best laid plans and does what it will with them. In a big way it does sound as though Bobcat is in agreement with this idea since he too is a father and has had his own trials and tribulations throughout the years. You don’t really know what’s going on, but you do your best to make sure that you and your family get through each situation as well as you can.

As the guys prove however this is what makes a family unique, the manner in which each person gets through their personal ordeals and memorable moments in life, and it’s fun and uplifting to realize that as different as so many people are, we’re all possessed of a great many stories that almost anyone can enjoy in their own way, and the sharing of them in a group of like-minded people usually goes a long way towards making a positive moment. If nothing else this podcast is a good laugh and a good idea for many fathers to watch since it’s not too serious but it doesn’t break the bounds of decency or even move into utter lunacy either since they manage to keep things pretty grounded and don’t get into anything that’s uncomfortable or even controversial to talk about. If anything these guys are just two very down to earth and fun-loving dads that are keeping themselves young by enjoying life and doing what they can to bring in a little more hilarity to their podcast. Bobcat is the kind of comedian that was big decades ago because of his supposedly erratic behavior on screen and that voice that people happened to love. Now that he’s no longer doing that act he’s lost a few fans, but many have stuck around since he’s genuinely funny. That’s usually the mark of a casual fan vs. a true fan, the casuals will drop off when the actor isn’t doing what they want them to do and has left the parts they enjoy behind, while the true fans are those that managed to see that the one act wasn’t all that the actor had to give.

In that light, Bobcat Goldthwait is still a very popular individual even though his time has kind of come and gone on the main circuit and his mainstream status has really dampened over the years. He’s still funny and he’s still worth listening to as this podcast shows however.