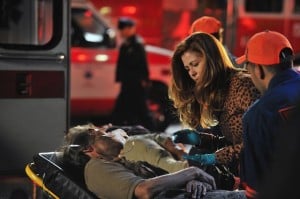 Last night’s episode ofÂ Body of ProofÂ managed to combine a fair bit of action and a whole lot of intrigue, all over-shadowed (pun intended) with the extra element of literal darkness. While investigating the cause of a fatal air crash which has taken out the city’s power grid, Megan and the rest of her team come across a drug trafficking operation.

I enjoyed the episode but it still feels like we need slightly deeper story lines before we’re going to get greater insight into these characters. Having said that we did discover a little more about Adam last night and his opinion of his father, whom we learn Â started out working for justice. However, he soon became caught up with politics and descended into a thirst for self-seeking political notoriety. It was a moment of clarity which helped Kate gain a little more perspective on her pursuit of the Senate. Â The female reporter who was nauseatingly willing to do anything for a story, including her attempts to interview a women who had just been told her husband had died in the crash, was also an extreme example of the depth to which Kate may need to sink if she puts her political aspirations above her humanitarian instincts.

Megan and Tommy were interesting this week. Tommy obviously still has feelings for Megan but is stepping back a little. However, as soon as Megan discovers that Tommy may have been injured on his way to the crash site, she appears to no longer be conflicted about where she wants the relationship to go. I had to feel a little sorry for Charlie. He went out of his way to help Megan, both in the investigation tonight and in gaining the exhumation orders for her father, but as soon as he saw Megan’s reaction to Tommy’s possible injury he gallantly stepped aside.

Curtis and Ethan were certainly heroes of the episode. I love these guys and every time I watch Body of Proof,Â IÂ Â just want to see more of them. Curtis’Â constant referencing of “Doomsday Prep Wars” was hilarious and when the two men chest bumped in celebration of fixing the power and Ethan was nearly knocked over I laughed out loud. 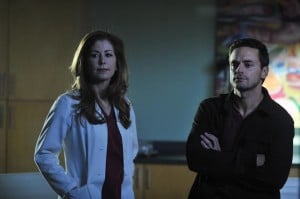 It was nice to have these occasional funny moments in an otherwise dark (no pun intended) episode. The man ultimately responsible for the crash certainly had me convinced that he was just a grieving husband, but the most poignant and sad scene for me was when one crash surivor stated, “It doesn’t really matter that [the suspect] has been caught, my wife’s still dead.” It ably demonstrated that there are so many other victims when it comes to both drug trafficking and murder.

The episode of Body of ProofÂ ended with Megan chasing off to the police station to find Tommy and I assume profess her love, but she arrives just in time to see him head out with Riley. It was a little sad but they have to keep the UST there untilÂ at least the season finale, right?

Tune in next week, Tuesday May 14th at 10/9c on CBS for the next episode ofÂ Body of Proof.