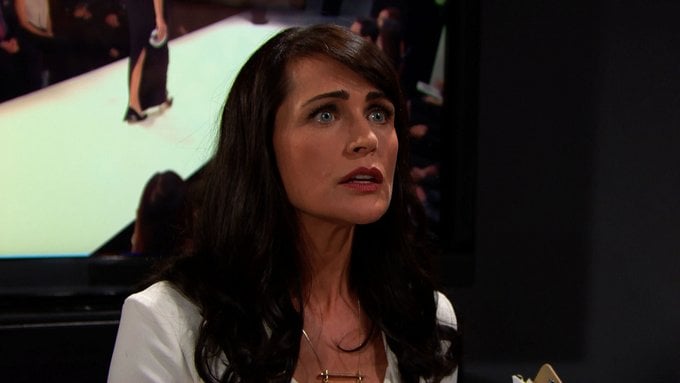 Bold and the Beautiful fans love a Flashback Friday, though we suppose that’s every single day these days, right? This is a day in which we will get to go back to 2017. It’s not a long time ago, but it does feel like a lifetime ago when you take into consideration just how many things we’ve seen happen since this one aired originally. This is the rivalry show when we see Sally — the young one — had some issues in her life. She was responsible for stealing some designs from the Forrester familyand putting them into a fashion show. She betrayed Coco and Thomas. CJ is there to remind her that if her line does not do well in this show, he will need to sell her building to Bill Spencer, who is willing to do anything and everything in his power to get this building from her whatever it takes. Additionally, we can also see that Wyatt was upsetting his father when he made it seem like he actually thought there was a chance this fashion show could show up and be a good one, which Bill did not like. This reminds us that there was a time when Sally and Wyatt were not romantically involved. Let’s look at their history.

She Didn’t Stay for Long

When the great niece of the original Sally Spectra was introduced to fans on the show in 2017, it was only for about a year. She did not stick around for long, but she did make an impact. She was there to take over her family’s company, but she quickly realized she wasn’t as horrible and as devious as they were in the past. She found some friendships with Liam and with some other characters, she liked it in LA, and she didn’t want to be her great aunt or anyone else. She didn’t want to do things by lying and stealing and making things worse. The show wrote her out a year later, though, citing that they didn’t have room for her any longer. But, fans were horrified by that to the point that they brought her back not long after that. She was back within two months of being gone, and that was a big deal for everyone in town.

When she first came to LA to try and revive the old family brand, she met Thomas. She liked him. They began dating, though everyone in the Forrester family hated it when they did. But, the other problem is that Thomas did not mention one very small thing about his life when they met and began seeing one another. He did not mention that he was a father to a very small little boy by the name of Douglas, and he didn’t mention Caroline, his baby’s mother. But, Bill was happy to make sure that Sally learned of these things by bringing Caroline and their baby to town, making her want to have Thomas all to herself again, and then lying about her dying so that Thomas would leave Sally and go be with her. They tried a second time to make things work, but that didn’t work out for them, either.

She Met Wyatt on Her First Night Back

When Sally left, it was to go to NYC to spend time with Thomas. She thought she could have a future with him, and he needed to be near his son while his son’s mother was dying. It was all a lie, though, and she wasn’t dying. Well, except for the small part where she actually did. But, things did not work out and she came back to LA. She was in a bar having a cocktail one night when she ran into Wyatt, someone with whom she’d been friendly with in passing before. They drank too much, went home together, and that was the beginning of their beautiful story. We all fell in love with them at that point, but we were all horrified when they didn’t work out because of the awful Flo. We like Sally and Wyatt, and we want more.