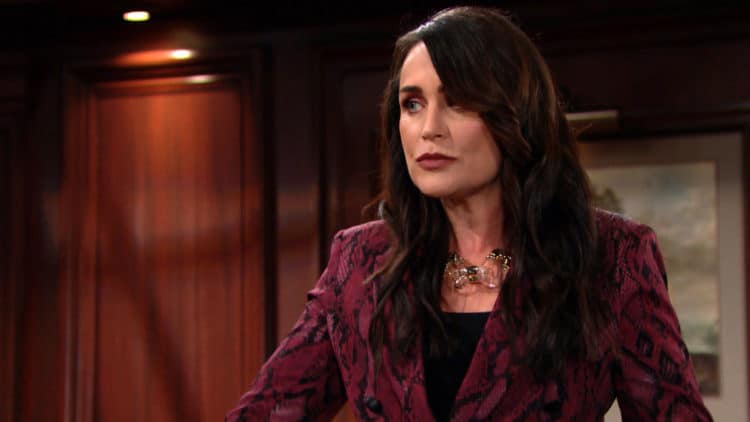 Bold and the Beautiful fans spent the entire week last week dealing with things that make us go hmmm. It was classic clashes week, and it was nothing short of amazing. We love seeing all these men and women fight it out over the years, and it’s one of the primary reasons we come back to keep watching the show. It’s good stuff, and we are not mad about it at all. So, for now, we want to take a look at what this week has in store for us. It should be pretty good considering we are going to see a lot going on since this week is Back to the Beginning Week. The network is going to air the very first ever episode of the show, and we cannot even handle the excitement we feel is coming our way as a result.

It all started back in 1987. The world was a very different place back then. White washed denim and shoulder pads were a thing, but the internet was not. Social media was not around. People read books made of paper and magazines and the newspaper was actually paper you had delivered to your home. If you wanted to talk to someone on the phone, you had to pick it up and pull the cord out of the room and through another door — it probably hung on the wall, after all — just to get a little privacy, and most people didn’t have portable phones at that point. Hair was a lot bigger back then, but it wasn’t because ‘the bigger the hair the closer to God,’ as they sound in the deep south. Things were different.
Brooke and Ridge were not a thing. Stephanie didn’t hate everyone. Sally did. Quinn wasn’t around. Eric hadn’t married any of his kids’ spouses yet, and Bill Spencer Jr. wasn’t even a man whose name we knew. The only familiar faces that you know right now that were there back then were Brooke and Eric. Everyone else is either gone or played by a different actor.

This was a show all about fashion and the lives of the exceptionally beautiful. The Forrester family is the most successful family in the fashion business, and the Spectra family wants to reach that level of success but they just can’t seem to make it happen. The entire family is just known for being ridiculously good-looking, and the handsome Ridge was just a playboy looking for a good time even though he was engaged to be married.

We saw a party at the Forresters, of course. Everyone who was anyone was there, including a young woman by the name of Brooke Logan. She was there because her mother’s company was catering the party, and she was there to help introduce herself to Ridge Forrester. She wanted to meet him and have him fall in love with her, and she did not care in the very least that he was already engaged to yet another socialite by the name of Caroline Spencer. She could handle that.

Ridge was seeing Caroline, but Caroline’s father was not having any of that. He was a notorious playboy, and he was demanding that he stop seeing his daughter before he hurt her. Ridge would not listen. Brooke was home to see her sister, Katie, who was brutally attacked on her way home from college, and she had a plan. Everyone is relatively well-behaved during this one considering the fact that this was a show in which everyone was just being introduced to everyone else. There wasn’t any bad behavior or craziness going on right then and there, but we knew it was coming. It would not be long before everyone learned just how devious and selfish these people could be, and it wasn’t long before everyone fell hard for this show. If you haven’t seen this episode, it’s time to watch it now. This is good stuff that might just answer a bunch of your questions, and it might just make you want to know more of what is going on and how it’s all working out for them now.