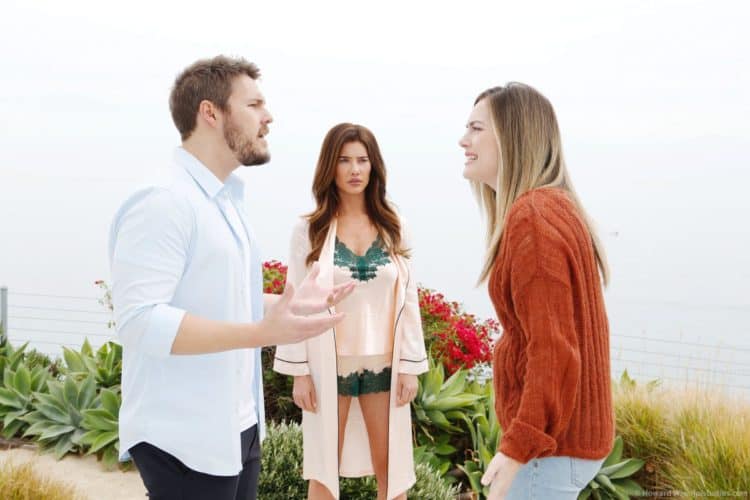 Bold and the Beautiful fans can sum up last week in one sentence. No, make that one word. Still? Brooke is still deciding if she wants to continue her marriage to Ridge, and he is doing the same to her. Liam and Steffy are still shocked that Zoe actually fell for Thomas and is not going to go through with their very carefully crafted plan. Thomas is still using people left and right to try and get to Hope. Hope still doesn’t know what she wants in her life. She spent the better part of last year praying that she never lost the baby she gave birth to, that she had Liam back, that their marriage was good, they were raising their baby, and they were happy. She got the answers to her prayers when she found out her baby never died, and now she’s here not happy with the way things are in her life.

She’s not happy at all because Thomas has decided he doesn’t want to be with her — in her mind, anyway — and because Liam is now asking her to marry him, but only if she gives up the custody of the little boy that Thomas is sharing with her. She’s not sure she can do that, but it’s the only way for her to get her own family back. All she prayed for and wished for and hoped for and wanted for a year is here in her hands, and she cannot do it. We know she doesn’t want to give up Douglas, but we also know he has an entire extended family — including an Aunt in Steffy — who will always care for him and make sure he is loved and taken care of. What will she do, and why are we still on this?

Anyone feeling good about this?

Thomas’ plan is working. There’s a lot that is going to happen for him now that he’s in control. We know, for example, that there is nothing that is going to happen that he is not working on right now. He knows that Liam asked Hope to marry him and give up custody of Douglas to Thomas, and that is not what he wants. But, that’s not what she wants, either. She did, however, see the moment that was created by Thomas that was a thing that worked for him. He planned a situation in which it looked like there was a bit of something going on between Steffy and Liam, and that’s what she saw. He made sure that she saw every moment of it, and now she’s a mess.

There’s nothing else that we can do but listen to her talk to her mother about it. She wants to know if she thinks this is a problem, and she’s worried. Brooke, of course, is going to tell her daughter that she can do things that will make this better. It will be a situation that makes everything better, and that she will get her daughter everything she wants. We assume this means she’s going to talk to Liam and even threaten him about it. We don’t know for certain, but she will probably also take this out on Ridge as well. This is what we’ve been saying would happen, do excuse us for not sounding at all surprised or shocked.