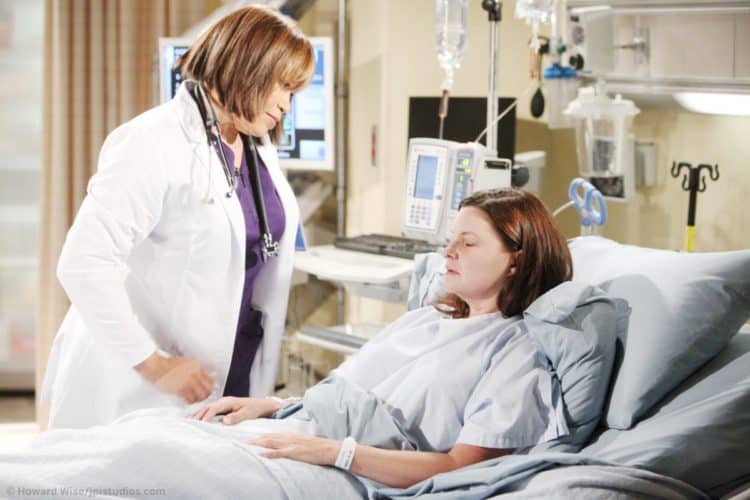 Bold and the Beautiful fans are kind of excited to see how Shauna reacted when her daughter told her mother that she has decided to give the biggest gift of all to the people in her life she hurt so much. Her mother has been urging her for a while now to do something for the Forrester and Logan families so that they will forgive her for the little situation where she stole Hope and Liam’s baby, lied, told them it died, and then sold it to Steffy and pretended all was well for months on end when she realized what she did to them. She might not have felt so bad about it if it didn’t happen to be people she cares for, but that’s not what happened for her. Now she’s doing what her mother asked, but she’s also telling her mother that she’s decided to give her gift without giving her name.

Shauna is not happy. She will, however, figure out a way to make sure everyone finds out that it is her daughter who is giving up her own kidney to save the life of Katie. That will make everyone forgive her, right? She’s saving her sister’s life by giving her a part of her own body, so that should be enough in their eyes. But, we don’t know. Then again, they’ve all forgiven other people for far less in the meantime, so it might just work out fine. We don’t know, of course, but we do know that it might work for everyone. We will see. Katie will find out her prayers were answered, and someone is anonymously giving her their kidney. We aren’t sure how to plan on keeping this secret to themselves, but we assume it will all come out before much longer. Will it work to Flo’s advantage, though?

In a poignant moment with Bill, Katie admits her fear of dying and not seeing Will grow up. WATCH FULL EPISODE: https://t.co/fGQffAiYTk #BoldandBeautiful pic.twitter.com/X0wO4qX3jl

This moment hits home for anyone who has a child.

Katie is holding out for hope and holding on for life this week on #BoldandBeautiful. pic.twitter.com/z18jcikFQa

Katie is in a place where her life is about to change for the better. There is someone with a kidney that matches her own who is willing to donate to her. This means she is about to undergo surgery to have it transplanted into her body, and her family is not going to miss being there while it happens. Hope and Liam are going to spend their time in the hospital, too, and they are going to be there for Hope’s aunt. She will not miss this, but it does mean leaving behind her babies for a while. They’ve asked Wyatt and Sally to babysit little Beth and Douglas for a while, and we do worry a bit about Hope and Liam not being with them. While we think that all parents need some time from their kids, we worry about Thomas in this situation. It cannot be easy for anyone, but we think Wyatt and Sally will do an excellent job.

The entire Logan and Forrester families will gather in the hospital to give kisses and love and support to Katie as she goes into surgery. She’s getting a new kidney, which will save her life, and that’s something she needs. She’s happy that things are going her way for once, but will she be able to focus on things in her life that are going on outside of this? She still has no idea who her donor is, and we know who it is. And we aren’t sure that her donor will remain a secret for much longer. There is one woman who wants them to know.