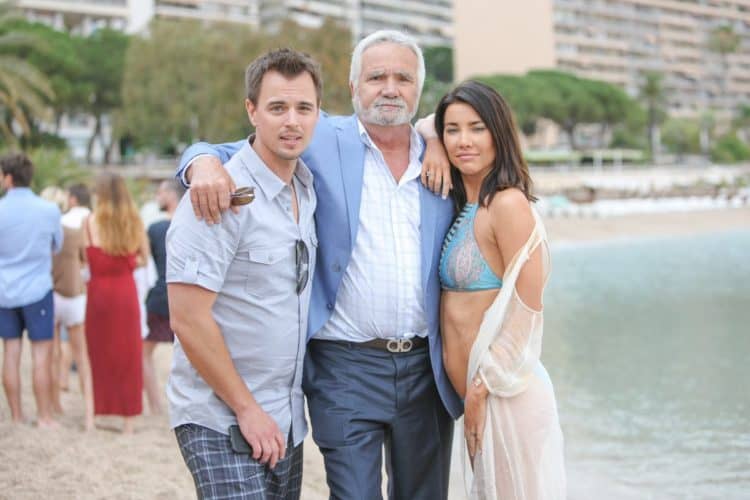 Bold and the Beautiful fans saw some very interesting things this week as we were going back in time. The beginning of the week was all about how things work behind the scenes as the cast and the crew were in Monaco to film some very fun and very exciting episodes for that old show. There was a lot that we didn’t know about filming shows like this, and it was so much fun to watch as they did that. We actually kind of hope that there are more in this category so we can see how things work all the time like this. It is so much fun for those of us who don’t have much experience with television and filming and how it works on their own set, let alone how it works when they are on the set in another country away from all things familiar. We were big fans of this. Now, it’s time for everyday flashbacks as the show is out of original content. But, we are all right with that one. Since the new one today is all about how Quinn is going to follow Eric overseas to the Spencer Summit, we thought we might talk about Quinn. Let’s have a long look back at some of her most insane moments…because following a man across the world classifies as insane.

That One Time She Kidnapped Liam

We all very vividly remember this. Steffy and Liam were in one of their on-again, off-again situations in which she was not sure that things would work out. He was in love with her, but she did not know. There was some confusion there as he was working on his feelings and not really communicating well with her, and she didn’t know. She turned to Wyatt, her very good friend, for comfort. That’s when things got ugly. Wyatt clearly fell hard and fast for Steffy and wanted to be with her, but his brother was in the way of that. She couldn’t be with Wyatt when she still had feelings for Liam. So, his mother decided the best answer to his personal life problem was to get Liam out of the picture. She hit him over the head in the parking lot, kidnapped him, sent a text to Steffy from his phone to let her know that he’s not into her, doesn’t love her, and has to get out of town for good because he’s so over her, and then she took him to the cabin. He ended up with amnesia, where she then fell in love with him, and then things just spiraled out of control.

That One Time She Killed Deacon

Back to that time she took Liam and held him hostage, her own ex-husband happened to show up at the cabin. She’d already convinced him that they were married and that they were in love with one another, and that’s when things fell apart. Deacon came into the cabin, realized what was going on, and she had to kill him to keep the ruse going on. She took him out to the cliff to talk to him, and that’s when she pushed him over the edge and they had a situation to deal with. He didn’t die, but she did think that she killed him, she wasn’t upset about it, and that was her plan. It just didn’t work out that way.

That One Time She Ruined Wyatt’s Love Life

Oh, did we say one time? There was the time he was in love with Hope and she sent Hope a video that made her question their relationship. There was that time she tricked Steffy into marrying him even though she was in love with Liam, and that was hurtful. There was that time he was perfectly happy with Sally and his mother told him to leave Sally and date Flo. She’s good at all of that, but we think she needs to let it go, move on, and leave her son alone to live his own life in his own manner. He can do it. He’s a big boy, and he has the ability to be with someone of his own choosing without his mother’s approval.