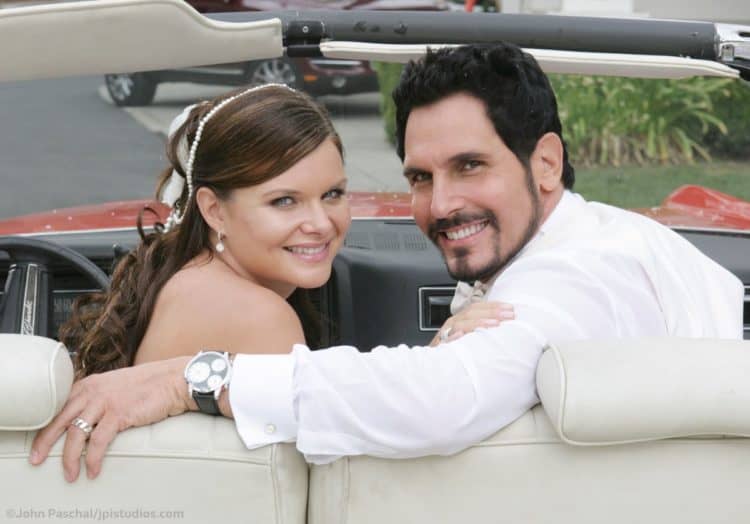 Bold and the Beautiful fans are so excited about Wedding Week. It’s such a fun theme, and today’s wedding is such a good one! We’ve already seen couples such as Ridge and Brooke and Liam and Steffy say their vows and exchange their love for one another in front of their friends and family and we have so much love for that. But, today is one of our favorite couples that never works out; Katie and Bill. This is the encore episode of their 2009 wedding, which was a big one. They and their friends and family. They had their love. They got married where she grew up, and her own father was there to walk her down the aisle. Her father, Stephen Logan, was played by the famous Patrick Duffy — someone we all know, love, and recognize like we’ve known him our entire lives — and it was a good day. So, let’s get to it and take a look at the times Bill and Katie have been married.

We are taking a look at their very first wedding because this is the one we get to see today. This was their big, splashy, happy wedding. This was the first time Bill Spencer Jr. had ever said I do to a woman before. She was the one woman he’d been with who actually made him happy and made it work with him, and they were so in love. In fact, fans thought that they might just be the couple to beat. They were happy, they didn’t seem to have too much drama going on, and the fact that he was willing and ready to settle down with her was a bit deal in his life. He was so happy to marry her, and that was such a pretty day. She was stunning. He was stunning. The guests were stunning.

But, it didn’t work. He learned throughout the first year of their marriage that he had a son with another woman a long time ago, and in walked Liam. Katie was an ideal wife helping him learn to accept his son and adjust to his way of living. He was not sure how he felt and what to do about any of this, and she was there to help him throughout the course of their time together. Sadly, that didn’t work out when he decided to have an affair with Steffy shortly after, and he left Katie. Of course, they also get back together when she is sick and then she gets pregnant, it’s a high risk pregnancy, and they decide to make it work.

That’s when she also though that she could leave him to Brooke and they’d raise the baby and be happy together. Of course, when she finally realizes this is not what she wants, her husband and sister had fallen in love. That was the end for a moment.

Much like the first time that things were good with them, this was a situation in which other people played a large role in the way things were going. For example, she was with her husband, they were happy, and Brooke came back to town. When she came back, her sister and brother-in-law gave her a job and they let her work for them. Of course, she was feeling all kinds of things for Bill, but she kept telling him how wrong it would be for them to be together and how wrong it would be for him to leave his wife. Katie began to suspect that things were not what they seemed, and it all started to take a fall.

Bill and Brooke began spending more time together, which has led to a kiss, and which has had so much of an effect on their relationship. There is so much hurt here, and yet they continued with things the way that they would continue — knowing it might actually kill Katie, who has had several health issues, including heart attacks, since she met and fell for Bill. They ended up divorcing because of Brooke, again, and this is just why she cannot forgive him right now for his indiscretions.