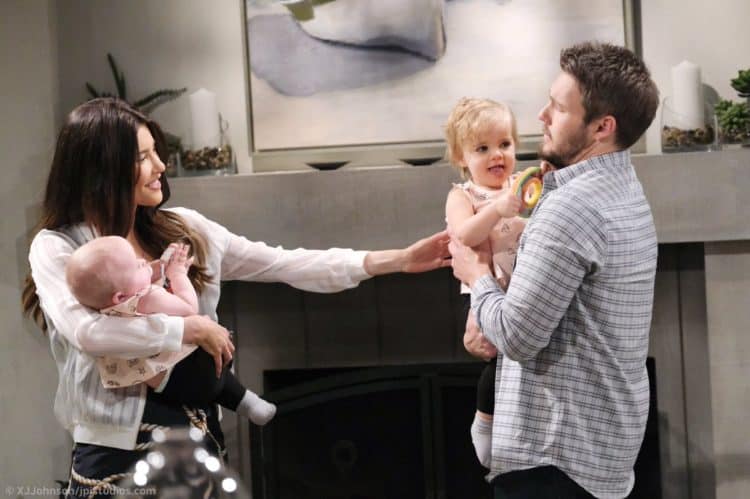 Bold and the Beautiful fans know that it’s wedding week, which means we get to see a different and amazing wedding every single day this week. This day is a special one because we love Liam and Steffy. They’ve been married a few times, and that’s their situation. Today, we get to see them get married in Australia in front of the most amazing and most beautiful sight. The Sydney Opera House, which is an iconic location in the world many people only dream of seeing at some point. These two are happy to be here, they are happy to be wed, and they are not going to allow anything to ruin their day and their beautiful wedding. We cannot wait to watch, and it makes us want to go back over some of their weddings and their biggest moments in time.

Their first wedding happened in 2011, and it clearly did not work. These two had a lot of drama in their lives that involved Liam first being in love with Hope, wanting to marry her, feeling neglected by her as they planned their wedding, and subsequently falling hard for Steffy after saving her life. They share a very passionate kiss. Hope just so happened to have been in the same place at the same time that they shared this kiss, dumped her fiancÃ©, and he immediately asked Steffy to marry him. The two went quickly to Aspen where they were married, but Hope wanted to do all she could to make sure this did not happen. She wanted to be sure that they didn’t wed, but they did. She made it clear over and over to Liam that she still loved him, and ultimately he was still in love with both of them. That was a situation that worked out for her, because he did ask his wife for a divorce. Of course, Steffy chose not to sign the papers for some time, eventually did, but they didn’t divorce because he still had feelings for her. That day, that is. They did divorce.

Here was a wedding that didn’t really work out for anyone, either. This happened a year after their first marriage ended. Liam was with Hope at the time, but he and Steffy ended up going out one night and having a super fun night on the town that really was good for them. When Hope found out, she was less than thrilled and things didn’t work out for them. She ended it, again, and he went back to Steffy. She ended up pregnant, and they decided to get married very quickly. However, things didn’t work out for them when she saw her husband kissing Hope and when she was involved in a terrible motorcycle accident that caused her to miscarry their baby and to end up infertile as a result. Their marriage ended after that.

She was married to his brother for some time, but only because she loved Liam but she one day received a text message from her that allowed her to believe that he was done with her and that he was leaving town. It was really from Quinn, who had kidnapped Liam and sent the text because her own son was in love with Steffy and wanted to marry her. That happened, but it didn’t take long for Steffy to realize that being married to Wyatt meant not being with Liam. They rekindled their love, got married in Australia, and that is where we are today. This is the wedding that we are seeing them engage in. This is the one that is so good. They got to spend their time in Australia married to one another and making the most of their lives, and it’s been so good for them — well, until Liam and Sally started spending a lot of time together, shared a kiss, and then Steffy thought he was killed in a building explosion, slept with Bill out of heartbreak, found out her husband was alive, slept with him, got pregnant, and then Liam found the paternity test, wanted to know why she even needed one, and all of it came out.