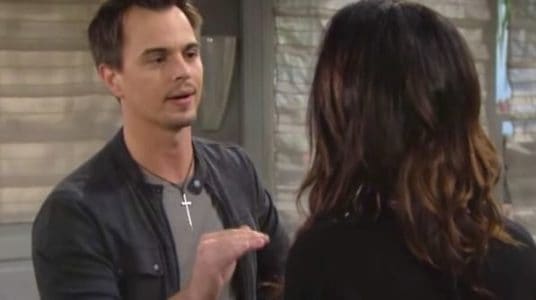 The Bold and the Beautiful fans are seeing Wyatt turn from upset to furious. He cannot believe his father used him to take advantage of the fact that Steffy and Liam were on the rocks. Now she’s single and alone and her husband is newly engaged to the other woman. He hates that he is the one in this situation and that he unwillingly and unknowingly had anything to do with this. This is not something he is happy with, and he’s not going to stand around and allow this type of behavior to continue. He wants to get the revenge he is certain he’s due.

He’s confronting his father in every manner, and he’s furious. You see, what will happen is that he will only be more upset when he’s done with this conversation, too. Bill doesn’t care that Wyatt realized what is going on. Bill thinks it’s funny that it took Wyatt so long to realize he played him and made him part of his evil plot to ensure Steffy has no choice in the world but to be with him.

He will remain relatively unphased when Wyatt screams and yells at him about this, but he will probably remind his son who the boss is, who is in control, and where his place is in this company. He will not care too much that Wyatt is upset. It won’t prove to be much more than a minor inconvenience in his own mind. He’s not someone who is overly indulgent like that. He’s just not going to stand around and listen to it forever.

And that will make Wyatt even more upset. He will likely take his issues back to Katie and ask her what he needs to do. They will, together, come up with a plan to take them down and make him suffer even more than they already plan on making him suffer. This might work, but we also think that it might become one of those situations that doesn’t do much more than just make it worse for all involved in the long run.