Home
TV News
Bones 5.13 “The Dentist in the Ditch” Review 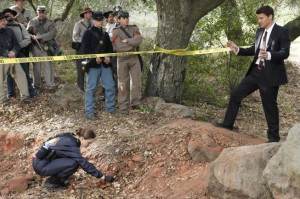 Two soldiers from a civil war re-enactment stumble upon a body during their feud. They argue about whether or not the body is a yankee or a confederate. Really that’s what they argue about, I guess they must be used to seeing a skeleton in the middle of the re-enactment.
Cam, Dr. Brennan & Mr. Nigel-Murray are examining the remains when she screams for her life. Spiders come out of the remains and scare Cam. Apparently she doesn’t really like spiders, which is great, neither do I. Dr. Brennan is not really bothered by spiders, is she not afraid of anything?
The victim is a dentist by the name of Dan Pineard. Lucas Pickford is Danny’s contractor and is found in the house. He seems shocked to find out that he is dead. He informs Booth & Brennan that he & his ex Chris had a really bad breakup. They go to interview the victim’s ex-boyfriend who tells them he worked two jobs to put Dr. Pineard through medical school and they broke up after he opened his own practice. Brennan finds an arrow head in a tree. Booth takes him in to be questioned. Mr. Nigel-Murray shouts out that he needs rhubard to clear the concrete from the remains. Wow, you learn something new everyday. Booth interviews Dr. Pineard’s dental hygenist Grace Bryson. She claims that she got hepatitis-C from him during a procedure. He catches her in a lie. Yay, Booth’s BS meter is spot on once again. Hodgins & Mr. Nigel-Murray determine that the victim played football. The coach assures them that no one had anything against Dan Pineard. Turns out that the dental hygenist, Grace Bryson, lives in the area where the victim was killed. The contractor Lucas Pickford killed Dan Pineard over paving stones. He claims it was self defense. Instead of calling 911, he let him bleed out. 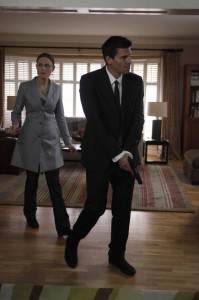 Mr. Nigel-Murray has been tagged it for intern of the week. He seems to be bothered by the fact that Dr. Brennan does not compliment him on a job well done. I guess he still hasn’t learned that Dr. Brennan really does not do that as much as she probably should. He gets his job well done by the end of the episode, but somehow I think she did it to please him because I am sure someone (Cam) told him to do it. We know how Dr. Brennan is, she usually has to be told to be nice to the interns. He is a little insecure, I guess Dr. Brennan has that effect on people. I would feel the same way if I was in a room with her too.
Booth’s little brother is back from his vacation in India with a huge surprise. After a heartwarming hug between the Booth brothers, Jared informs big brother Booth that he didn’t get into any trouble in India but he fell in love. They are interrupted by a case, because lets face it, every time someone has to have a serious conversation it always manages to come at a bad time.
Booth & Brennan have a discussion about Jared’s girlfriend. Brennan keeps reminding Booth that he used to believe in true love and in love at first sight. I guess his brain is still acting up. Its nice to believe that there is true love in this world and I somehow think that Booth forgot that along the way. He’s a romantic at heart, which makes me love him that much more.
Overprotective Booth is interested in finding out more about Jared’s new girlfriend. He takes it upon himself as the good big brother he is to run a background check on her. He finds out that she used to be an escort. Brennan asks him if he does that when she goes out with anyone, he quickly changes the subject. Yeah, I am pretty sure he does that too.
Booth confronts Jared about his girlfriends past. Jared is understandably upset that he ran a background check. He is mad that Booth can not trust him to make his own decisions. I guess once a big brother always a big brother.
Brennan feels anxiety about Booth’s belief system. She reminds him that he once told her that because love is real that her father’s past shouldn’t bother her. She tells him that its because of his belief system that she now has a relationship with her father. I’m starting to wonder why Booth has lost all faith in love. Is it because he is still unsure about his feelings for Brennan?
Booth & Brennan show up to have dinner with Jared and Padmay. Jared asks him to be his best man at his wedding. Brennan makes a toast about love. The look on Booth’s face when she talks about when they first met is priceless. She tells them that because of him she now knows that love exists. She makes a heartfelt speech renews my hope that these two will get together before the end of time (or the end of the series, whichever comes first). These two seem to be creeping closer and closer to finally admitting to what all of us have known since season 1, they are completely and totally in love with each other.